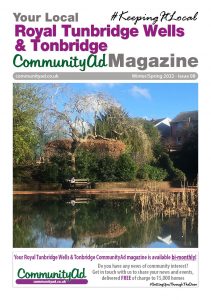 A bit about Tunbridge Wells

Tunbridge Wells is a town in western Kent, close to the border with East Sussex, with a population of 59,947 (2016 Census).
The town came into being as a spa in the Restoration and enjoyed its heyday as a fashionable resort in the mid-1700s. Although its popularity as a spa town has waned, the town remains highly popular and derives some 30 per cent of its income from the tourist industry.
Tunbridge Wells largest theatre is the Assembly Hall in Crescent Road, which has a capacity of 1020. The Forum is a 250-capacity live music venue located also in the town and the Trinity Arts Centre is a converted Church. Unfest is an annual free music festival which takes place in May.
Tunbridge Wells FC play in the Southern Counties East Football League and have a history which dates back to 1886. Tunbridge Wells Motor Clubs is one of the oldest motor clubs in the UK, being first founded in 1911. Fenton’s rink in Dundale Farm is the only dedicated curling ice rink in England. Other sporting clubs in the town include Tunbridge Wells RFC (Rugby Union), Weald Warriors RLFC (Rugby League), cricket, swimming, running and squash.
The town has 11 Primary Schools and four secondary schools (two non-selective, two grammar). Health services in the area are provided by the West Kent Primary Care Trust with the Maidstone and Tunbridge Wells NHS Trust running the Tunbridge Wells Hospital, located at Pembury.
The landmarks most readily associated with Tunbridge Wells are The Pantiles (Georgian Colonnade) and its chalybeate spring.
Notable residents of Tunbridge Wells include have been footballer Gary Brazil, comedian Jo Brand, musician Sid Vicious and actress Louise Jameson.
Royal Tunbridge Wells is twinned with Wiesbaden, Germany.

A bit about Tonbridge

Originally recorded as ‘Tonebridge’ in the Domesday Book 1087 with the towns name also spelt Tunbridge before being changed to Tonbridge in 1870 by the GPO.

After the signing of the Magna Carta, Tonbridge was ruled by King John before a besieged garrison by Prince Edward (son of Henry III) burnt the town rather than see it fall. Tonbridge Castle and the town was the rebuilt after this and Tonbridge became an official residence and records repository of Edward II in the 13th century.

There are several primary and secondary schools in the town including the famous Tonbridge School of which its alumni include a plethora of notable people including Sir Tim Waterstone, Olympic rower John Vigurs and actor David Tomlinson among many more.

Numerous community events take place throughout the year in Tonbridge including a firework display and Christmas Festival, the Tonbridge half marathon, a dragon boat race and summer fete which takes place in the gardens of Tonbridge Castle.

The town is home to two cricket clubs; Cowdrey CC and Tonbridge CC. Their football club Tonbridge Angels play in the National League South and in the late 60s’ had former England manager Roy Hodgson representing them.

With easily accessible transport links, Tonbridge Railway Station is one of Kent’s busiest with 4.1 million passengers using it every year. Tonbridge is also twinned with French region of Le-Puy-en-Velay, Haute-Loire and German town Heusenstamm.