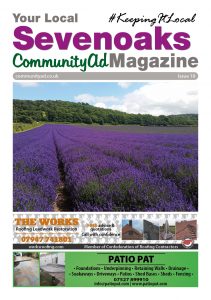 WELCOME to The Sevenoaks CommunityAd Magazine e-version – where you can read the magazine online, by clicking on the image.
Looking for Local Businesses Products & Services? Search Sevenoaks Business Directory, using the search box on your right..
The Sevenoaks CommunityAd magazine is delivered bi-monthly and keeps all its readers up to date with local news, articles of community interest, planning, achievements, popular topics, local events, meeting clubs and groups.
Editorial: If there is something you would like to share with the community, please contact us here.

A bit about Sevenoaks

Sevenoaks is the 19th highest populated town in Kent with an estimated number of 29,506* locals.

The town’s main landmark is Knole House, which dates back to the mid-15th century. The English poet, novelist and garden designer Vita Sackville- West grew up there. Knole house also ranks in the top five of Englands largest houses and the Sackvilles still live there, although the property is owned and maintained by the National Trust.

There are four C of E Churches in Sevenoaks as well as a Roman Catholic Church, several denomination Churches, Baptist and evangelical Churches.

Sevenoaks have a Wildlife Reserve with a lake and woodland trails and also have many different community groups, including the Scouts, Ramblers, Forum and Rotary and Lions clubs.

The self- proclaimed “father of science fiction” H.G Wells spent his time in Sevenoaks for a break from life in London and actually wrote ‘The Time Machine’ novel during his stay in the town.

Sevenoaks has three non-league football clubs, Corinthian Football Club, Sevenoaks Town F.C and Ide Hill F.C. Sevenoaks Town F.C is the most successful of the three clubs also having the most history. Formed in 1883 ‘the Oaks’ currently play in the Isthmian League South East Division following promotion in the 2017/18 season in the Southern Counties East Football League.

*numbers according to 2011 population census