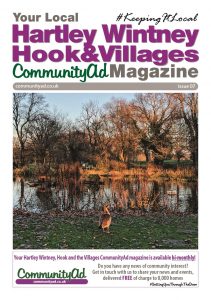 Hartley Wintney is a village civil parish located in the Hart District of Hampshire, with a population of over 4,999 (2011 census).

St Mary’s Church is Hartley Wintney’s original Church of England Parish Church and was built in the 13th century.

Notable buildings in the village include 18th century Country House- West Green House, owned by the National Trust. Victoria Hall was opened by Lady Calthorpe in 1898 and is still going today, hosting many events to raise money and fundraise the Victoria Hall Charity.

The Hartley Wintney Festival is an annually held event organised by the Rotary Club of Hart, that takes place every June.

Among many well-known residents of the village, 2013 US Open Champion Justin Rose learnt to play golf in Hartley Wintney.

Hartley Wintney F.C is a non-league football club that play at the Memorial Playing Fields. Hartley Wintney Cricket Club is one of the oldest and most beautifully sited clubs in the country, dating back to 1770.

St John the Evangelist Parish Church was completed in 1938, replacing the Tin Tabernacle that was used since 1886. Life Church, formerly known as Hook New Covenant Church has a history expanding over more than 100 years. This Church was originally founded by the family who funded Burberry.

Hook’s development since the 1980s has been rapid which is why it is referred to as a small town instead of a village, due to its population and urban expanse.

There are a number of local primary schools in the area with the nearest secondary schools based in Basingstoke and Farnborough.

Hook United Youth Football Club was founded in 1987 and play their home games at Hartletts Park.