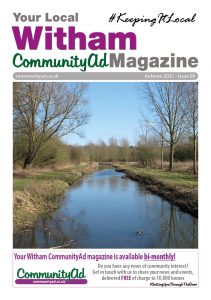 A bit about Witham

In 913, according to the Anglo-Saxon Chronicle, Edward the Elder marched from Hertford to reconquer Essex and encamped in Witham on his route to set up a base at Maldon.

The name Witham is a composite name, part Brythonic (probably from a cognate of Gwydd= “Woods” in modern Welsh) and “ham” a typical Saxon ending and remains unchanged in spelling. The parish of Witham appears in the Domesday book of 1086. The manor of Witham was given to the Knights Templar in 1148. To the north of the current town is Cressing Temple, which was the earliest foundation of Templar lands in Britain built over 700 years ago.

A famous one-time resident of the town was the author Dorothy L. Sayers whose statue stands opposite Witham Library, which is a short distance from the author’s house.

Witham Town F.C currently plays in the Isthmian League North Division and the town also have a Rugby Club, Cricket Club, Leisure Centre and Hockey Club which dates back to 1924.

The famous ‘Witham Walk’ is a weekly three-and-a-half-mile trail along the river and through the town.