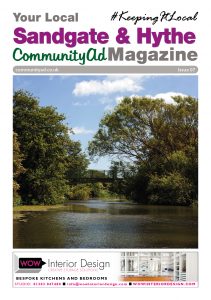 A bit about Sandgate & Hythe

Sandgate is a village in the Folkestone and Hythe district of Kent, with a population of 4,639 (2011 census).

Comedian Hattie Jacques was born in the village, which boasts an array of pubs including The Ship Inn, The Providence Inn, The Clarendon Inn and The Royal Norfolk Hotel.

“The Sea” is a song written by English electronic band Morcheeba about the former beachside bar ‘Bar Vasa’, which appeared on the Channel 4 programme Ramsay’s Kitchen Nightmares in 2006 but has unfortunately been permanently closed since 2016.

Davina the Dolphin was a sociable solitary dolphin who resided off the coast in the Folkestone and Hythe area for eighteen months, having last been reportedly seen in November 2007.

Sandgate is also the location of the Shorncliffe Redoubt, a Napoleonic era earthwork fort associated with Sir John Moore and the 95th Regiment of Foot, known as the 95th Rifles.

Sandgate Primary School is located on Coolinge Lane and the village is also twinned with Sangatte, France.

Hythe is a coastal market town on the edge of Romney Marsh, with a population of 14,516 (2011 census). The word Hythe is an old English word meaning haven or landing place.

St Leonards is a large 11th century Church and there are also two castles located in the area, Saltwood and Lympne.

A farmers’ market takes place in Hythe every second and fourth Sunday of the month.

Notable people with connections to Hythe include H.G Wells, who helped build Spade House, inventor of the marine screw propeller Francis Pettit Smith who was born and raised in Hythe and Noel Redding, the bassist with the Jimi Hendrix Experience who gave his first public performance at Hythe Youth Club.

The town once possessed a bustling harbour which has now disappeared, due to silting. Hythe is the birthplace of Mackeston Stout, a milk stout that was first brewed in 1907.

Hythe Town FC play in the Isthmian South East Division League, playing their football at Reachfields Stadium. As well as being crowned Kent League Champions twice, The Cannons best performance in the FA Cup came in the 2010-11 campaign where they reached the first round, losing to Hereford.