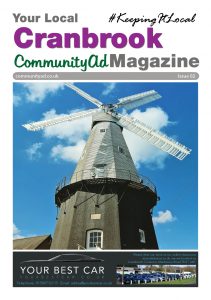 WELCOME to The Cranbrook CommunityAd Magazine e-version – where you can read the magazine online, by clicking on the image on the left. Looking for Local Businesses Products & Services? Search Cranbrook’s Business Directory, using the search box on your right..
The Cranbrook CommunityAd magazine is delivered bi-monthly and keeps all its readers up to date with local news, articles of community interest, planning, achievements, popular topics, local events, meeting clubs, and groups.
Editorial: If there is something you would like to share with the community, please contact us here.

A bit about Cranbrook

Cranbrook is a town in the Weald of Kent that lies halfway between Maidstone and Hastings with a population of 6,717 (2011 Census).

The first bank was opened in Cranbrook by Samuel Waddington in 1803 (closing in 1805) and its only surviving windmill Union Mill (built-in 1814) dominates the local skyline and is open to the public during summer afternoons usually from 2:30pm-5:00pm.

Religious sites in the town include St Dunstan’s Church, also known as the ‘Cathedral of the Weald’, Cranbrook Strict Baptist Chapel (built-in 1787), the Cranbrook Congregational Church and the Catholic St Theodore’s Church.

Cranbrook can boast as the location for one of cricket’s earliest references where a “certain unlawful (later deemed not unlawful) game called cricket” took place in 1652. The Weald Sports Centre has indoor and outdoor facilities and local club Cranbrook Joggers run regular routes around Angley Woods and Bedgebury Forest. The town also has a senior football club

Rugby Football Club) that have teams ranging from under 7s to senior adults.