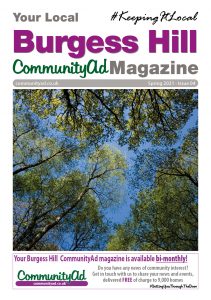 A bit about Burgess Hill

Burgess Hill is a Civil Parish and town located in the Mid Sussex district of West Sussex with a population of 30,635 (2011 Census).

Many believe the hill in the towns name refers to the hill located on which the railway stands, although there is a Burgess Farm on a hill in Folders Lane, it is unknown if this has any connection to the towns name.

The town has two shopping centres, the Market Place and the Martlets and a leisure facility, The Triangle Leisure Centre which is home to many local sports clubs and was opened by Queen Elizabeth II in 1999.

Burgess Hill is one of the few towns that have retained an independent cinema, The Orion Cinema which is 91 years old. The Burgess Hill Musical Theatre Society regularly hold productions there.

The town also boasts a Symphony Orchestra and Choral Society, that performs two concerts every year.  Bedelands is the towns nature reserve consisting of ancient meadows, woodland, hedgerows and ponds.

The towns local football club, Burgess Hill Town FC play in the 7th tier of English football, the Isthmian Premier Division. As well as football, there are various other sporting clubs in Burgess Hill such as rugby, baseball, cricket club, pool, netball and hockey. The local skate park also provides many sporting opportunities and holds an annual competition.

There are several churches in Burgess Hill, including the All Saints United Reformed Church, Burgess Hill Baptist Church, and St Andrews Church among many others. Burgess Hill is also home to the International Bible Training Institute.

There are ten local primary schools in the area as well as four secondary schools/colleges and three further educational establishments.

Burgess Hill is twinned with Schmallenberg in Germany and Abbeville in France.

In July 2006, Burgess Hill achieved the status of being a Fairtrade Town, which is accomplished when a group of local volunteers promote Fairtrade products in the town’s shops, local businesses, organisations and households. Burgess Hill renewed its status as a Fairtrade Town again in 2010 and 2012.