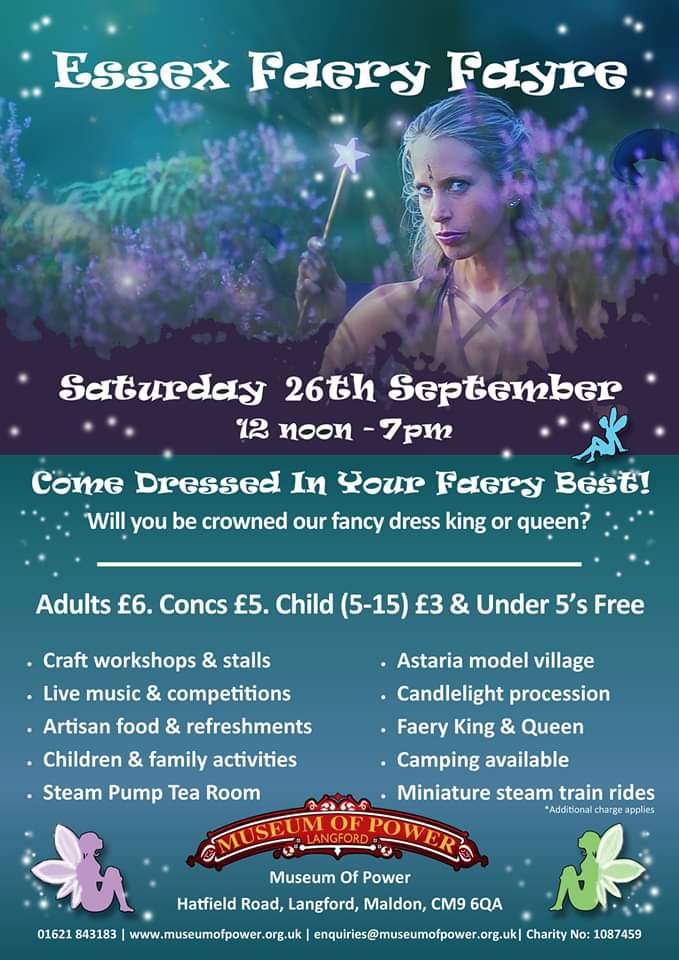 Essex Faery Fayre & Candlelight Illuminations
Saturday 26th September 2020 from 12noon-7pm
Second Faery Fayre at the Museum & Astaria Model Village with fairy themed stalls, crafts and competitions, storytelling, wand making workshops, a mystical labyrinth, hoola hoop sessions and crowning our chosen Prince, Princess, King and Queen.
We have a wonderful line up of entertainment for you too! We will be announcing those as the year unfolds.
The day will finish with a procession leading to our Model Village with over 400 candlelit lanterns illuminating the village and its Fairies and Elves.
Adult £6.00, Concessions £5.00, Children (5-15) £3.00, Children Under 5 FREE
The miniature steam train will be running between 12noon & 6pm to be confirmed by the railway team. Please contact the Museum to confirm.
‘Marshall’ the Lilleshall pumping engine will be running on compressed air and other compressed air engines/belt workshop will be running.
Housed in a former pumping station the museum includes probably the only Lilleshall triple expansion steam pumping engine still in situ in the world!
For more information, visit www.museumofpower.org.uk or phone (0)1621 843183.

The Museum, a unique and fascinating experience for all the family, is located at Langford, near Maldon, Essex and is easily accessible from the A12 (see ‘Visiting’).

Set in seven acres of grounds with the River Blackwater running through, the main exhibits are housed in the 1920s Steam Pumping Station, the former generator hall and boiler house.

Pride of place is given to the magnificent Lilleshall triple-expansion steam engine which was returned to steam for the first time in 50 years in April 2011. As a result in September 2013 the Museum was awarded “Engineering Heritage Listed Status” by the Institution of Mechanical Engineers. The certificate was awarded by John Wood (Chairman of the Awards Committee) who remarked the award recognises the contribution that the staff and volunteers have made in preserving part of Britain’s heritage for future generations to enjoy.

The Museum includes numerous power-related exhibits that will interest young and the not so young, with many working examples of various power sources, machinery, equipment and tools.

In addition, in the former workshop, the Steam Pump Tea Rooms (opened in April 2011) offer an extensive selection of refreshments and treats for every age where visitors can relax.