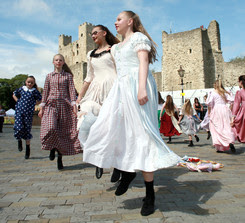 Medway will commemorate the 150th anniversary of the death of Charles Dickens virtually.

Unfortunately, due to the coronavirus pandemic planned events and activities to celebrate Dickens 150 were unable to go ahead, in line with government advice, however a number of virtual activities will now be held to mark the anniversary.

Dickens spent much of his life in Medway and many of his novels and characters were inspired by his experiences of living here. Eastgate House in Rochester features in The Pickwick Papers and The Mystery of Edwin Drood. The Grade 1 listed Elizabethan mansion, which was built in 1590, was also used as a Victorian school.

A host of videos, quizzes, talks and virtual trails have been created by Medway Council and its creative partners which will be posted on social media from Tuesday, 9 June until Sunday, 14 June for residents to take part in. These include a video where residents can meet one of Great Expectation’s lesser known characters created by Play on Words, a Dickens themed online Medway Print Festival and a tutorial from Dizzy O’Dare on how to write your own masterpiece.

The council’s Heritage Team education officer, Dr Jeremy Clarke, has also created videos to illustrate Dickens’ association with Medway and how it influenced his work as well as glimpses into Dickens’ private and public lives. Children will also be able to take part in a virtual trail and meet some of his best loved characters as part of a drawing activity as well as search their homes for items that would have been familiar to a Victorian family in a special Victorian treasure hunt on Friday, 12 June. Quizzes will be posted on the Enjoy Medway social media accounts to test residents’ knowledge of the author.

Residents can also download a copy of The Mystery of Edwin Drood from Medway’s library service and join in virtual discussions about the novel on the Reading Drood blog each month until October. If you’re not already a member of Medway libraries you can join online and borrow eBooks immediately. A member of the Medway Libraries team will also read an extract from The Uncommercial Traveller on their YouTube channel.

Cllr Howard Doe, Medway Council’s Portfolio Holder for Community Services, said: “Although we will not be marking the 150th anniversary of Dickens’ death as we had planned I am pleased that we will be commemorating his death and celebrating his much loved works. We are proud of Medway’s connections to Dickens and I would encourage residents to take part in our virtual celebrations.”