Heroes of past would be proud of heroes of today, says Lord Mayor

Proud heroes – As people across the district play their part in battling the global coronavirus pandemic, it is more important than ever to take a moment to remember their sacrifice is part of a long and proud tradition.

That is the message of the Lord Mayor of Canterbury Cllr Pat Todd as we approach Remembrance Sunday on 8 November.

Commemorations across Canterbury, Herne Bay, Whitstable and the villages will be adapted in order to conform with government guidelines and the wishes of veterans to ensure everyone taking part stays safe.

Cllr Todd said: “The courage, commitment and gritty determination of the British and Commonwealth men and women whose service secured peace and our freedom 75 years ago and who have fought in every conflict since should never be forgotten.

“Nor should the bravery of those communities who stood steadfast and united while they hoped and prayed for victory.

“They did not let adversity get the better of them and nor shall we as we fight the virus.

“Indeed, all across the district people are making sacrifices for the common good and are standing together – the public, the emergency services, the NHS, the council, voluntary and community groups and charities. 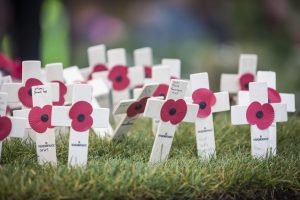 “This year we will all need to find other ways to remember that do not involve us all gathering together in large numbers.”

In Canterbury, wreath laying will take place in the Cathedral precincts in an invitation-only ceremony rather than at the war memorial in the Buttermarket. The traditional parade through the city centre has also been cancelled.

A video of the ceremony will be posted on the councils Facebook page while the traditional service will be streamed on Canterbury Cathedral’s website.

Herne Bay will see a small ceremony take place in the Memorial Park with invited guests but organisers are keen that the usual crowds stay away and find other ways to mark the occasion which will be broadcast on Cabin FM 94.6 or via their website and live streamed on their Facebook page.

Another small ceremony will take place on the forecourt in front of Whitstable library where numbers will also be strictly controlled.

Cllr Todd said: “In these challenging times the wishes of organisations like the Royal British Legion should be paramount.

“They say there are lots of ways to mark Remembrance Sunday in an appropriate way including pausing for the Two Minute Silence at home or on the doorstep or watching the TV coverage.

“You could  have a small Remembrance service in your garden or online via platforms like Zoom, write letters to veterans or serving personnel or create your own Remembrance artwork with your children to display in your window.”

For information, to buy a poppy and to make a donation visit britishlegion.org.uk or visit their stand in Whitefriars. They will be in Whitefriars Square until Saturday then in Gravel Walk opposite Tesco Metro until Sunday 8 November.

There are no official events planned for 11 November.