Fundraiser for FND Action in Deal 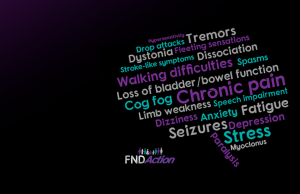 In an effort to raise awareness, as well as funds, for FND Action, mum of four Rachael Walter, 33, and 12-year-old Skye have taken on a 5-mile walking challenge.

Rachael, a fashion designer by day, was diagnosed with Functional Neurological Disorder (FND) and Non-Epileptic Attack Disorder (NEAD) in 2017 after an 11-year battle, and Skye, her best-friend’s daughter, was also diagnosed with FND in 2019.

The duo, who both live in East Sussex, created a GoFundMe to help raise money for FND Action whilst keeping donators updated on the challenge. We caught up with Rachael, who runs a group on Facebook for anyone with FND and NEAD, to find out a little bit more about her and Skye’s challenges and the 5-mile challenge.

Speaking to CommunityAd, Rachael explains the problems that can come with FND and NEAD: “FND is a disorder that affects our brain and nervous system and the communication between them both. NEAD is non-epileptic attack disorder. This is seizures like epilepsy but it’s not caused by an issue with the electrodes of the brain. FND can effect mobility, speech, memory, mental health and many other things.”

In 2021, Rachael’s health deteriorated due to FND and NEAD, with mobility, speech and memory all being affected. “I went from walking and talking normally, to now needing crutches to walk around the house and short distances and my wheelchair or mobility scooter. I can’t always talk, I stutter, forget what I’m saying, or I physically cannot speak, due to a seizure.

“But I decided I didn’t want this to stop me as I loved being out and about. So I thought I would walk 5 miles with my crutches to raise money for FND Action. And I chose this charity because when I was at my lowest, the amazing team reached out to me and offered support; which I will forever be grateful for.

“Raising awareness for FND and NEAD is majorly important to me as it’s still a very unknown disorder and this is because it’s a rare disorder. We as the sufferers have very little or no support as some professionals are unsure how to treat us.”

Due to two seizures, the challenge was put on hold after 2.8 miles, but as Rachael made sure to explain: “This isn’t finished. I’m currently planning my final walk of 2.2 miles to complete the 5 miles I set out to complete. I’d like to thank anyone who has donated to the 5 miles for FND so far, you don’t understand how much it means and how much it can help.”

If you would like to donate and find out more make your way over to Rachael’s GoFundMe and to find out more about FND and NEAD head over to the FND Action website.