Sitting down with Greenhithe’s Steve the Spartan 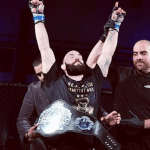 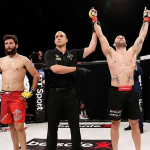 Ten years ago, MMA fighter Steve O’Keefe turned professional and his decade in the sport has been an absolute rollercoaster journey, amassing a brilliant record of 9-4 and sharing the ring with former and current fighters from the sport’s biggest organisation, the UFC. Aiming to fight next year, CommunityAd caught up with Greenhithe’s Steve “The Spartan”, as he’s known, as he talked to us about his Revolution Martial Arts gym in Greenhithe, battle with Conor McGregor in 2013 and overall love of the sport.

What are your earliest memories of MMA and when did you realise you had a passion for the sport?

I have always been into combat sports from the age of 9 years old. I started taekwondo first as I was growing up in a rough area and my parents wanted me to learn how to defend myself. I then went into boxing and competed successfully in taekwondo at an International level. When I saw the first UFC events, I decided then it’s a sport I wanted to be a part of.

Who has been your biggest influence and inspiration in MMA?

My biggest inspirations in the sport are my students. I see the hardship that some of them went through as young men and now they have developed into adults on a focused path to success. The benefits of partaking in sport are my motivation, not just physically but how it can save your life, make you see parts of the world you may never have.

You turned professional 10 years ago, did you initially have an overall goal of turning professional or was it always one fight at a time?

I just wanted to compete. I have fought four guys that have been in or are still in the UFC. Artem Lobov, Conor McGregor, Chris Fishgold and Jai Herbert. I have won some, I have lost some. For every fighter the goal is the UFC. I had some years off after I fought Conor as I started a family and the goals changed. I opened a gym and became more of a coach. I know I could still make it at the top level but I would have to sacrifice everything. Jai Herbert is in the UFC now. He is an amazing fighter and he will do well. In our fight I controlled it completely, would have probably had been a 10/8 round. Then he cut me open with a knee and the fight was stopped. That’s the beauty of this sport. I will still fight when I get the itch. I love it. But the goal is now to progress my athletes.

What would you say is your proudest moment in the cage?

I think my comeback against Sean Carter. Sean is as tough as they come. I hadn’t fought for 4 years. My students told me I need to get back in there as I was training like a full-time athlete. I finished the fight via heel hook in the first round. Sean never gets finished in the first. I thought I was going to be in there for 15 mins solid.

You shared the ring with Conor McGregor in 2013, how was he and could you envisage back then just how big of a star and how successful he would become?

He was great away from the cage. I knew him for some time after as well. His stage personality sells the sport. And sells it well. He has done more for this sport then anyone ever will. Increased wages, increased the number of fans, crossed over into other sports. He is an incredible athlete. And not a natural physical athlete either. His body type needs to work so hard to stay in the shape he has. It’s not talent, it’s hard work. He was always going to be a star. When I fought Conor, it was a year too late for me. I started working full-time six months before and my partner was six months pregnant at the time. I know I hadn’t properly prepared for that fight. I could have beat him back then but my head wasn’t in it. I had Conor in a choke, a choke I had used just two fights before to win. But for some strange reason I let go and panicked.

I love the whole fight game! But I do feel that being a black belt in BJJ and being able to transfer it so well into MMA, unlike a lot of fighters, is my area of expertise. I love Dustin Poirier, Sean O’Malley, TJ Dillashaw. Fighters that put it on the line and experiment.

You opened Revolution Martial Arts a few years ago, was it always in your plans to run your own gym and teach all forms of martial arts to the local public?

I opened Revolution Martial Arts to show people the benefits of training martial arts. How it can have a positive impact on their lives as much as it did mine. Only good can come of it. Having good athletes is just a by-product of the hard work people put in.

As a gym owner, can you explain just how troubling these last few months have been for you?

It’s been a struggle for myself and the team as my students train four or five times a week. Hopefully soon we can get back to normality. We have been running online classes but it’s not the same as rolling around and choking someone out, is it?

Is there a fighter from your stable who we should all keep an eye on?

All of them. They are all savages. I have at least three fighters I could bet my life will get into the UFC. The others are still developing but I have at least three who could go in now and do well. Tayo Odunjo at welterweight, Kingley Crawford at featherweight, Tom Creasey at flyweight, and Jawany Scott who will be making his pro debut at flyweight this year. Like I said, the others are always improving and sometimes something clicks and all of a sudden, they mature so quickly as a fighter.

To anyone reading who may be interested in coming along but a bit anxious as they have never trained in MMA before, what would you say to them?

Getting there is the hardest part. 90% of the people I teach are just there to exercise. We always have beginners and they are always made to feel welcome. You won’t ever look back.

Away from MMA, what are your hobbies and interests?

Playing with my two gorgeous daughters are my only other hobbies.