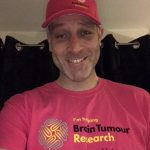 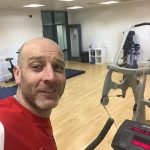 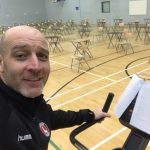 At the beginning of 2021, former Maidstone United footballer Ryan Royston undertook a phenomenal 1744.2km cycling challenge on an exercise bike from his own living room as well as at work to raise money for Brain Tumour Research.

As Vice Principal of Haberdashers’ Aske’s Crayford Academy (HACA), Mr Royston’s life was touched by inspirational student Emma Bugg who sadly suffered and battled with a brain tumour for many years, tragically losing her battle on 18th October last year.

Wanting to raise money for Brain Tumour Research, Ryan looked back to his childhood to find inspiration which resulted in his heroic cycle challenge.

CommunityAd caught up with Ryan to find out more about the cycling challenge, including the tough parts, as well as telling us just how special Emma was to everyone that knew her…

You have smashed your initial target (£1,650) with your current amount at just over £3,200, have you been surprised by the fantastic fundraising support you have received?

Overwhelmed. When I set up the JustGiving page it randomly put in a value of £1,650 and I thought that was as good a target as any but thought it might be a stretch especially given how many people have been struggling financially during lockdown and the pandemic. Some of the donations have blown me away, £50 and £100 donations and a couple of small donations with messages about having lost their job and wishing they could donate more. The donations from Emma’s mum and sister were also quite moving.

What was the toughest part of your challenge and how were you able to drive yourself on everyday to complete this?

When I first set about the challenge, I looked it up on Google and saw it was 970km which I thought was pretty manageable and then someone said to me “you can’t cycle through the sea” so I went on maps and found the route by road was 1347km, quite a difference. Then, another “friend” added you can’t cycle on motorways either so in the end I signed up to an app which had a pre-planned route which was 1744km, quite a difference from the original plan. Nevertheless, I was determined to get it done by the date I set myself.

The most difficult rides were when I was struggling for time or when we’d been out as a family for the day on a Sunday evening and then I was disappearing off to the garage to get 30km in. The first week or two I was finding anything more than 15km a challenge so I was playing catch-up the whole time, I was never ahead of schedule. In the end I cycled for 68 days out of 72 (4 – I missed through illness in the middle).

You clearly have incredible fitness levels, what about this challenge interested you the most?

Not sure I’d say incredible but I’m certainly in better shape now than I have been for a number of years especially after this. When I was a kid, we used to go on holiday in Cornwall (it’s a long way from Yorkshire); one year we visited Land’s End and I heard about this challenge then as a young teenager, I guess it just stuck with me so when I was thinking about what I could do it was the first thing that came to mind.

For many that take on a cycling challenge, the positives include being out in the fresh air taking in sights but due to lockdown you had to get your miles in on the exercise bike, was this a hard task and if so, how were you able to overcome it?

I think it worked for me I was able to watch TV, listen to music, do some marking, even proofread one of my friend’s novels for him whilst cycling along. For any football fans who want to read a great football-based story check out ‘Eye on the Ball’ I’ve had the pleasure of proofreading the sequel and it’s fab.

How long will the JustGiving page stay open for?

I’m not sure it will close as such, there’s no reason to close it so if people still want to donate please do, it really is a great cause.

The cause you have fundraised for is very close to your heart, can you tell us how special a person Emma was to everyone that knew her?

Emma was one of the most amazing pupils, her smile and laugh filled the room. The way she approached life and school with such vigour and determination was a lesson to anyone. When people aren’t making the most of their life or opportunities, I feel like I just want to shake them and tell them about how wonderful Emma was and how they should learn from her. I’d be lying I said I hadn’t shed a tear over Emma’s passing but I am trying to use my memories of her as an inspiration to be better and to make the most of everything I am lucky have.

Emma, you will be missed but not forgotten, rest in peace. We should all learn from Emma’s attitude and have a positive outlook on life and to cherish even the smallest moments that we have with each other. So, when you’re having a bit of a bad day just remember to choose happiness and light up the world like she did.