Sé Mali is a PhD student at the Bartlett School of Architecture (UCL), researching LGBTQI activism and queer placemaking. As part of Margate Pride they have created the Queer Spaces Margate Project, which explores what Margate means as a place to its LGBTQIA+ residents. We spoke to Sé to find out more.

Where did this idea first come from?

What kinds of queer spaces exist in Margate? What do these spaces mean to people? What is unique to Margate? And what memories are connected to spaces?

These questions were the starting point for this project, which, over eight recorded interviews across June and July 2022, explored different physical, public and private places, businesses, bars, cafés, the sea, nature and other open spaces with LGBTQI+ people living in Margate. Alongside long-term locals or recently arrived, of different ages, identity and background, these interviews began highlighting past and present queer spaces – what remains, what has emerged, what has been fleeting, and what is hoped for.

When I moved to Margate this year, I was already thinking about similar questions in relation to my work based in London, but as I began connecting with the community and meeting people I found myself curious to find out what the answers would be here.

I met the photographer Elissa Cray after I arrived, who created the Pride Portrait Project which started in 2020. When the pandemic hit and Margate Pride’s parade was cancelled, Elissa wanted to continue documenting the LGBTQIA+ community and their allies. Two years on, Elissa’s portraits constitute an important archive of the community in Margate. I was invited to contribute to the exhibition PRIDE FACTORY which opens on August 5th, and so I combined both my research and creative practice to create a film. The Queer Spaces Margate Project contributes to the archive created by the Pride Portrait Project, by exploring the spaces connected to the queer people that live here. In doing so, the different ways LGBTQI+ people think of as queer spaces were documented, highlighting their uniqueness and particularity in Margate.

The film includes voices from the community, overlayed onto long shots of places mentioned throughout these interviews. Purposefully, these shots are often not connected to the places being spoken about in the recording. This is to navigate some of the dangers of locating and mapping queer spaces, pinning them down in a way that might make them less queer, but building an archive nonetheless.

This film and project touches on only some of the experiences of being LGBTQI+ in Margate, they may resonate with some, they may be eye-opening to others. But it is not an exhaustive account of these experiences. Questions remain, who is not included here and what does the future look like for queer spaces in Margate, are just a few.

Margate has changed enormously over the past decade or so – do you think this transformation makes Margate a particularly queer place?

As still a newly arrived person to Margate, I can’t really comment on the changes in the past decade as I’m still trying to come to grips with that history. But from speaking to people, both locals and people who have moved here, there is an acknowledgement of that change.

One participant shared that when they returned to Margate after studying elsewhere, they had to completely relearn their hometown. Several said that until now, there have been very few queer spaces, and that actually many have been created in the last few years. Margate has changed a lot, and there will have been opportunities for LGBTQI+ to be part of that transformation to a degree. But there will be fall out from that transformation – and maybe we’re actually talking about gentrification here. Who gets pushed out?

I wonder if instead of a place being more or less queer – I wonder if we aren’t also talking about a question of visibility. Definitely changes in attitudes have changed, and legislative changes around marriage and family building in the UK have pushed social acceptance to a degree for some of the community. When digging into the history with some of the participants, it sounds like Margate has always been a space for ‘otherness’, for those on the margins of society, which might include queer people.

I think it is this visibility – of queer bodies, businesses, bars, shops, events – that makes Margate feel like a particularly queer-led and allied. 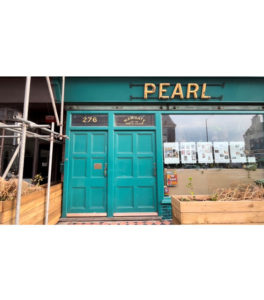 Were you surprised by some of the stories you collected?

Yes and no. I think when doing this type of research, it’s not so much surprise as it is delight to hear the different stories and connections people make when it comes to what people individually think of as queer space.

Beyond a narrow understanding of queer space as only physical and current, the project revealed the many ways LGBTQI+ people think of as queer spaces: permanent, ephemeral, historical and contemporary, remembered, wishful, safe, unsafe, community, belonging, unbelonging. From physical queer spaces past and present, such as The Margate Arts Club and Harriet’s, to discussions of queer-allied and queer-forward spaces, such as the George & Heart and the Tom Thumb Theatre, to exhibitions, homes, queer-led events, and to the backdrop of it all: the sea. Two commonalities across the interviews were on the uniqueness of community in Margate, and the intimacies of queerness and nature, such as The Walpole Tidal Pole, the dunes near the Wastewater Pumping Station or the meadow that sits above it.

Exploring what queer spaces are is an iterative process – constantly transforming, shifting and changing. Queer is a slippery word, sometimes all encompassing, sometimes flattening. But is holds a potential to think about what queer means to us individually, which might look a little different to the next person. I think that as a result, how we think of queer spaces in Margate has and will, therefore, never be one singularly defined thing, but instead respond to the ebb and flow of those living here.

Do you have a favourite queer space in Margate?

The Walpole Tidal Pool. For me, cold water swimming was a gentle gift this year in accepting my gender queerness. It is also a favourite for many people I spoke to, and I think the intersection of nature and queerness is something common for many queer people moving and living in Margate. To be able to see the horizon and enjoy the space there is by the sea, allows for a type of unfolding. 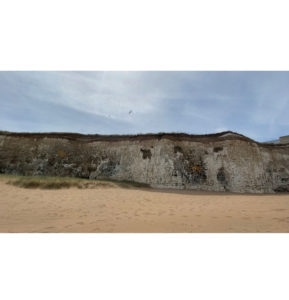 A huge thank you Eden, Jem, Lo Lo, Georgina, Lucas, Joe, Shaun and Sam for their time, contributions and voices as part of the interviews. Additional warm thanks to Liz, Elissa and Tara for their support, and to The Pie Factory for hosting us.

Margate Queer Spaces is a part of Margate Pride Factory, which runs from 5 August at the Pie Factory. See https://piefactorymargate.co.uk/exhibition/pride-factory-elissa-cray-and-se-mali/ for more details and event times.

To find out more about the project visit @prideportraitproject @queerspacesmargate on Instagram.