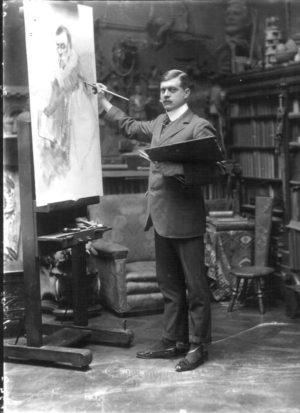 Vintage posters and adverts are having a well-deserved moment as part of décor with a difference. Even though their original purpose has long since passed, vintage advertisements have an artistic quality that makes them an attractive sight quite divorced from their consumerist agenda. One illustrator who created many beautiful posters was the Walmer-born illustrator John Hassall.

John Hassall was born in Walmer on 21 May 1868. His father was a naval officer. Hassall was educated in England and then in Germany, and ended up working on a farm in Canada with his brother. However after he had some sketches accepted by the Graphic, a now-defunct British weekly illustrated newspaper, he returned to England.

In the 1890s he studied abroad, learning art in Antwerp and in Paris, and in 1895 he began his career as an advertising artist. These were the pieces that would make him famous, and during this period he produced possibly his most well-known poster – The Jolly Fisherman. This painting was commissioned for 12 guineas by the Great Northern Railway in 1908 in order to encourage people to take the train for their holidays, and it features, as the name suggests, a cheerful looking fisherman skipping along a beach along with the caption “Skegness is SO bracing”.

At the time there was a special deal on which meant that people could travel from Kings Cross to Skegness for three shillings, and the poster was seen by and influenced many a traveller. The poster is thought to have greatly influenced Skegness’ popularity as a holiday destination, and it has become a key icon in the Lincolnshire seaside town, with the original painting hanging in Skegness Town Hall. 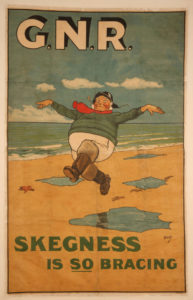 Hassall’s posters were popular for their bold lines and bright, flat colours. As well as travel adverts, he also provided art for political campaigns, which unfortunately included some famous anti-suffrage posters such as “Give Me a Vote and See What I’ll Do!” and “A Suffragette’s Home” which both mocked suffragettes as ugly and foolish, and portrayed them as bad mothers and worse wives.

In later life, Hassall opened his New Art School and School of Poster Design in Kensington. While it closed during the First World War, after the war was over he set up and ran the John Hassall Correspondence School.

Hassall was married twice and had two children, Christopher and Joan. Christopher would become a poet, and Joan an artist. Hassall died on 8 March 1948.