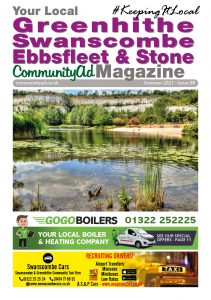 Greenhithe is a village based in the Dartford Borough of Kent, with a population of over 6,567 (2011 census).

Ingress Abbey is a historic country house located in the Hamlet of Greenhithe, dating back to the 13th century with ties to Edward III and King Henry VIII.

Bluewater Shopping Centre is based (postally) in Greenhithe and is the fourth largest shopping centre in the United Kingdom. Bluewater boasts over 300 stores including many fine dining restaurants, designer clothing stores and a cinema. In 2019 they celebrated their 20th birthday.

Swanscombe was important in the early history of cement with the first cement manufacturing works opened nearby in Northfleet around 1792.

There are two Churches in the village, St. Peter & St. Paul and All Saints Church.

Swanscombe & Greenhithe Cricket Club play their home games at Broomfield Park and have an extremely established history, dating back to 1880.

Swanscombe Tigers FC are an FA Charter Standard Community Club that first formed in 1986. The Tigers have an incredible 19 teams ranging from differing age groups and gender as well as two ability clubs for players with disabilities.

Stone Castle dares from the 11th century and is thought to have been constructed during the reign of King Stephen but was later permitted to King Henry II.

Now, Stone Castle is the regional office of a large cement manufacturer. The cement works which once stood there have now been demolished.

John Holes Quarry at Stone was used as a filming location for the mine scenes in the Doctor Who television story The Dalek Invasion of Earth.

Stone has a cricket team that was first established in 1888.

Three of the villages have numerous Primary Schools in the area whilst secondary schools Stone Lodge and Ebbsfleet Academy are located in Stone and Swanscombe.