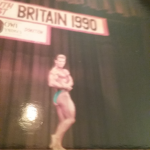 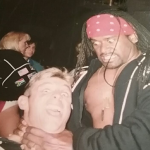 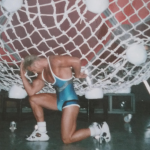 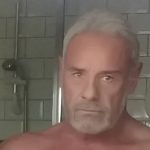 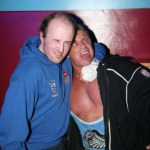 When I was informed that Michael Willson AKA Cobra from the British hit sports entertainment game show Gladiators is not only a local Rye resident but member of Harbour Health Club gym, I just had to delve deeper.

As a child, jumping on furniture whilst watching Cobra and Wolf was a ritual passage for any late ’80s early ’90s baby so when Michael Willson got back to me expressing his desire to be featured in this Rye edition, I felt a buzz of adrenaline similar to that of those heroic superhero gladiators.

Michael took me on a trip down memory lane, telling me how he started on his gladiatorial journey, his role models growing up and even gives his take on why Saturday night TV is simply not what it used to be…

Growing up, who would you say was your role model that motivated you to achieve your best and never give up?

My number one hero was Bruce Lee, then it would be Wolf’s brother’s brother-in-law Brian Jacks who competed in a gladiator type format show called Superstars in the 70s. Oh yeah, I also can’t forget the bionic man, and my dad.

When did you realise you had the potential to make a career from your fitness and strength and how did the Gladiator journey all start for you?

I started martial arts, and competed under the instruction of Jeff Britain who was previously a drummer for a little band in the 70s called Wings fronted by a guy called Paul McCartney!

I got a job in a gym and began bodybuilding. At just 20 years of age, I very quickly gained 13kg of muscle in about 2 years and started getting a lot of attention from females so that was the end of the kickboxing! I then started competing in bodybuilding competitions and was reasonably successful. I was Kent Champion and London Champion in the Mr category.

I originally applied to be a contestant and the producers’ wisdom knew I was far too handsome and fit so I needed to be on TV every week, either that or they were short of time to fill the Cobra role!

The show pulled in viewing figures of a whopping 14 million! What do you think are the main reasons Gladiators was so well loved and do you think there has been a downfall in Saturday night entertainment over the past 10-15 years?

I think the success of the show was the superhero aspect, we wore superhero costumes which I still have and it was a David v Goliath format with Joe Public taking on pro athletes.

You could follow the contestants through a journey to the conclusion and let’s not forget those costumes didn’t leave much to the imagination, boobs and bums everywhere!

I think it was quite exhilarating and the games were exciting, especially the final eliminator. TV producers don’t want to, or haven’t got the budgets to spend on big shows like Gladiators nowadays. It was very expensive. Today, producers just follow cheap formats like cooking shows or anything that they can put 3 judges on, mind you, I like Strictly. Producers don’t seem to have a lot of imagination or are given the opportunity to develop new projects.

To work that closely every weekend with one another, you must have been a very close-knit group, do any of you still keep in touch with any of the Gladiators or have reunions?

After the show finished quite a few of us went to film South African Gladiators for MTN. I was busy visiting schools all over the British Isles and doing talks about fitness and nutrition etc in schools and colleges but I have been semi-retired really. I have no mortgages etc.

I do still see many of my Gladiator friends at personal appearances like Comic Cons sometimes there’s 6 of us and we all get on; I can’t remember any arguments at all really. It was a bit like being on a busman’s holiday, we all worked out and competed in this and that before the show.

From a personal perspective, when I watched you every week you were not only mine but many of my schoolmates’ heroes. I used to climb the walls pretending to re-enact your skills. How proud are you of your time on Gladiators and are you aware of how many children and family front rooms you entertained every Saturday night?

I am very aware of the impact and love folk had for the show because of social media and meeting people at events. It’s wonderful how fond people are of the show, even though I think we were responsible for a lot of family furniture being destroyed after kids watched the show and got carried away. I meet people that have gone on to become athletes, fitness instructors, martial artists everything from its influence.

Follow the Gladiators Instagram @gladiatorstv to keep up to date on new shows and see nostalgic throwbacks from the golden days of Michael Willson’s Cobra and more beloved TV stars.