Stewart Pink the voice of drive time in Brentwood and Billericay 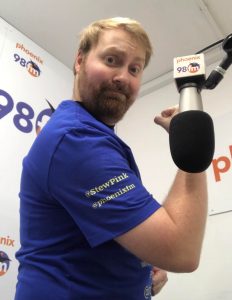 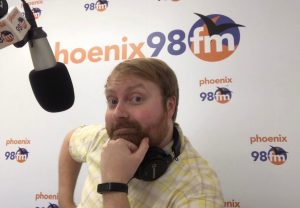 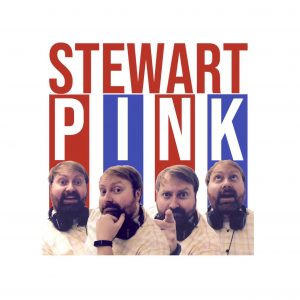 You may not recognise the face or faces of the man pictured above but if you’re a listener to the phenomenal Phoenix FM and you endure the daily commute you’ll certainly know Stewart Pink’s voice.

Stewart Pink is the drive time host responsible for some tedious and some genius seamless links. Stewart’s radio show is near impossible to listen to without laughing, even the most miserable downbeat geezers would have to concede at least a smile. Having first entered the Phoenix FM studios as a guest to talk about his stand up back in 2019, he was such a hit with the station and presumably listeners that Stewart was granted his own show. “One show a week gradually became three and now I’m on air every day, they can’t seem to get rid of me”.

Not many people get to say what they do is their dream but that is very much the case for the drive time host as Stewart recalls as a child he’d make his own radio show deploying the creativity of youth. “I’m just old enough to remember taping the charts on cassettes and now it’s me who’s the annoying voice that cuts in at the end of your favourite song. When I was a kid I had a Talkboy like the one in Home Alone and I’d record my own links between the songs. Not much has changed really; I’m probably still making the same jokes too”.

Tell the readers what they’ve been missing if they haven’t yet tuned in?

We always have fun. If there’s a tractor upside down or a milk spillage in the travel report it won’t go uncelebrated and you’ll discover music they just don’t play on national radio. It’s a show with personality and I get up to all sorts from performing my own witty ditties and playing my stylophone live on air to having a laugh with guests and listeners who message in. I see each show as a new page in this crazy story we write together every day on the radio and at the end of every show I sum up everything that’s happened in the day. It’s a fantastic way to hear a snapshot of what’s been going on in the world and in the lives of our listeners.

Throughout his time in broadcasting Stewart has many proud stand out moments from interviews and conversations with comedy hall of famers to reading that his radio show is being used as a tool for discovering local bands. As a staple of the show, Stewart does always seek to promote local musicians and is proud when a listener as a result finds themselves a new favourite band. “But most of all, I’m very proud to say that after several years of broadcasting I haven’t broken anything expensive… yet”.

What makes Phoenix FM a fine station to be a part of? It’s certainly got a variety of presenters, hasn’t it?

Having the freedom to be in control of our own shows is fantastic and it means we can set things up quickly without complications, whether it be a live band session, a new feature or an interview with a local guest. It also means everyone can bring their own unique personalities to their shows. Unbelievably, I still haven’t met everyone in person but so far, all the other presenters are a lot of fun too – they must be hiding all the boring ones.

Best thing about the town?

There’s always something happening! There’s a steady stream of things to do and local events to cater for all sorts of people. Plus, it always seems to me that there are a lot of people who are truly passionate and driven to support their community in the local area. I don’t think it’s all that common in most places but there’s a lot of good eggs around here.

Worst thing about the town?

Definitely Wilson’s Corner. Also, I wonder if there might be another secret nuclear bunker hidden somewhere inside our potholes. They really do pack a punch.

Why is it important that a community such as Brentwood has its own radio station?

It’s great to be able to focus on community events and local news in real detail. Phoenix FM has so many great shows and between us all we cover everything the regional and national radio stations do but with a local focus. From our excellent sports shows to regular Q&A’s with leader of Brentwood council, it’s a valuable resource that our local listeners can engage with and a brilliant platform for local businesses, charities, artists and musicians to share and promote their work too.

It’s also a working part of the community in that new volunteers are always welcome, we connect local businesses with clients and each other plus it’s a great way to share everything that happens in our community with the wider world. I’ve had messages from listeners all over, even as far as Texas and Moscow who all have Brentwood on their “places to visit” bucket lists because they heard about us on Phoenix FM.

If you were forced into isolation by Boris (or better still and more appropriately if you were invited to one of Boris’ parties) and could only play three singles what would they be and why?

What a great question! I heard Boris likes The Clash so “Should I Stay Or Should I Go” would definitely make the playlist, I’m sure that’d go down a storm on the back benches too. I imagine The Beastie Boys “You’ve Gotta Fight For Your Right To Party” might jog a few fond memories of last summer’s work events and “Get The Party Started” by Pink (no relation) to remind everyone of those awful photos of Michael Gove throwing shapes on a nightclub dance floor back in August.

Stewart is not only a not top notch broadcaster but also a bit of a wordsmith while the majority of us were getting fat and watching Joe Exotic’s mad life fall apart during the first lockdown, Stewart was penning comedy poems. “I started sharing some of my comedy poems on my radio shows and when I ran out of old ones I began writing poems about the pandemic. A few months later I realised I’d captured the whole story of our lockdown lives from the going of Cummings and the clap for carers to what it felt like not being legally allowed to join a conga.

“I decided that I should put them all in a book to capture this horrible yet hilarious piece of history. It worked out pretty well, Pandemic Poetry: The Covid Collection even spread as far as Russia and wound up a bestseller on Amazon. I rather wish I’d charged more than 99p, I might’ve actually made some money – hopefully my next book will reach the same dizzy heights.

“I like to connect with listeners on social media so do look me up @StewPink on Twitter and Instagram or on my website. You can tune in to Phoenix FM on 98FM in the local area, ask your smart speaker to “play Phoenix FM” or listen live on our website. I hope you can join me for a few hours soon!”