Rocking out with Stalker Miller 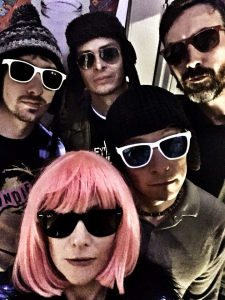 As musicians are finally able to return and play gigs across the Kent county, CommunityAd thought it would be fitting to catch up with local band Stalker Miller.

CommunityAd caught up with Stephen and discussed all things music…

How did you all get together and create Stalker Miller?

Shane and I were in a band 25 years ago. With growing up and life getting in the way, we did nothing musically until we were invited to play a few songs again at our friend’s birthday party. So, we pulled in my wife, Roo, to sing, and Stix to drum for us. We played some covers and this lit the flame to continue with the collaboration.

Where did the Stalker Miller band name come from?

After weeks of discussion and talk, our drummer Stix got up from the table one day after a group curry and commented on a painting we have on our wall. He said that’s cool and asked who painted it and I said it was my great uncle. All his work was signed Stalker Miller.

The penny dropped that this would be a really good name because Roo and I are both in the band and both Millers, and Stalker presented a darker side so it described our music really well.

We had no intention of using my surname for a band name.

It just beat any of the other ideas thrown in the pot. I mean, The Steve Miller Band has been done before, right? Stalker Miller just felt right so we voted and all agreed.

Who are your musical influences?

To readers who may not have heard your music, how would you describe it?

Where have you enjoyed playing the most so far in your career and if you could list a top 3 of any festivals/venues in the world you could play, what would you choose and why?

We do this for our own pleasure, we have no career path.

We’re an occasional gig band at the moment. And we’re always writing and have a number of new songs, but we don’t want to let too much of the cat out of the bag.

Our first gig was in Brick Lane, London, at 93 Feet East. The claim to fame there was the fact that Radiohead once played there. That was enjoyable!

As for festivals it would be amazing to play Lollapalooza and also go back in time to 1991 to play alongside Primus, Rage Against The Machine, Fishbone, Tool and Jane’s Addiction.

If you could only listen to one album for the rest of your life, what would it be and why?

That question makes me feel vulnerable! Like choosing a favourite child.

I would maybe have to cheat and combine two albums and make a playlist instead of one album.

Speaking for myself, I would probably take Soundgarden’s ‘Superunknown’ because it’s not only amazing but it’s varied and long and has such an amazing force all round.

I would also have to mash it with our own album, ‘Homegrown by Joan’, as I also like to hear what we’ve created.

We create to please ourselves firstly, so maybe it would a good idea to take Joan with us too!

Plans for 21 are to reform post-COVID like so many! Just to get in a room together again would be nice.

The long-term plan is to continue to be a band long term and to enjoy playing and creating music together.

For the latest band updates, where can readers go?

Please go check us out and let us know if you dig it? You dig?

You heard ’em, the best way to keep up to date with Stalker Miller is on Instagram. Check them out, support local bands and venues – they need it now more than ever!