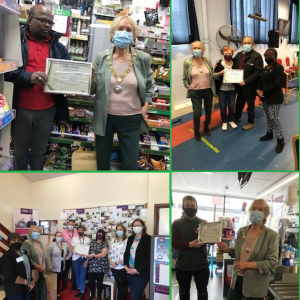 Whilst recent times have pushed us to our very limits, there have been those who have gone above and beyond for their local community. Whilst four Special Pandemic Hero Awards were handed out, we know there are countless individuals and businesses who have worked tirelessly to support their community over the course of the last 18 months.

CommunityAd were lucky enough to sit down with two of the four winners, Barry and Janet from Swanscombe Food Cellar and Christina from Home Instead Care Givers, to talk about the award and how it felt to be recognised for their efforts.

Barry and Janet told us: “It’s a great honour for the whole team, to realise we are appreciated. When we first discussed it, we weren’t sure we even needed a food bank in Swanscombe, it’s incredibly nice to feel appreciated and receive that award.

“You don’t like to think that you need a food bank in this day and age, but we were proved wrong, it’s very sad. We work with a lot of single people and families, young and old, people with disabilities, we help everyone.”

Christina from Home Instead Care Givers spoke about the award explaining: “It was a lovely acknowledgment for the team, it was them more than us who went out and who kept going out in the communities for the last year. Everyone was told to stay at home but they kept going out continuously. It was really nice to get this certificate; it was a lovely recognition.

“I’m extremely proud, I don’t know how they managed to keep going like this, it’s absolutely incredible. They deserve every certificate and award possible. When everyone was told to stay home, they went out every single day. They really made a difference; we couldn’t be prouder if we tried.”

We wish we could highlight everyone who has gone beyond their limits and supported the local community since the pandemic begun, so for now we will just say thank you to anyone who is reading this for your continued support.

Keep an eye on the Swanscome and Greenhithe Town Council Facebook for updates on the Swanscombe Food Cellar, and visit the Home Instead Care Givers website to find out more about their work.