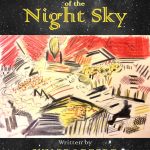 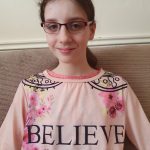 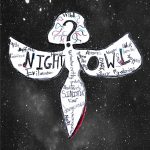 Sky Bradford is an incredibly talent young writer from Deal; from the age of 8 she was writing away and published with her first book, ‘The Stars of the Night Sky’ at the age of 11.

Sky’s grandad sent some of her writing to Dougie Brimson, an author and screenwriter, known for Green Street, Top Dog, and The Know. After reading a few paragraphs of her first book, (The Visitor of Atlantia), he was amazed by what he read and encouraged Sky to keep going with her writing and so she did.

The Stars of the Night Sky was published in March 2021 by Joseph Harris of Four Peacocks Publishing after Sky began writing during the first lockdown, March 2020 aged only 10. Sky’s grandad had ordered a copy of the ‘Four Peacocks Go to Town’ book and when he went to collect it, he showed Joseph Harris a few chapters of the currently unfinished book; Joseph said that he would love to publish it. By September 2020 it was complete.

The book was illustrated by Natalie Starr, one of Sky’s best friends and classmates. They had video calls together and Natalie would draw as Sky gave her instructions. Sky was absolutely delighted with Natalie’s drawings, “I absolutely love the drawings and she more than met my expectations”.

The book is an action/adventure, aimed at young readers from ages 7-11 set in a galaxy far, far away, on the planet of Star2. The evil Night Owl has risen from 1000 years of banishment and now the Starnosian people and all the living beings in the whole universe are under threat. Only one person can save everyone… unfortunately, Charlotte Dazzle doesn’t know it yet!

Sky has always enjoyed writing and has written for as long as she can remember. She said, “My imagination is quite wild and I enjoy making up stories in my head.”

The main character in the book, Charlotte, is outspoken, brave, very kind, a bit shy and will do whatever it takes to protect her family and friends, Sky tells CommunityAd. Charlotte is extremely special to Sky and coincidentally, she looks like the illustrator Natalie Starr.

Sky told CommunityAd what the process of publishing her book was like, “It was very strange because I had never done anything like it before; it was a bit of a rollercoaster as when I was writing the book, I was excited and then when I sent it off, I was very worried and there was a lot of suspense. I was over the moon when we found out it was going to be published, then when it was being proofread, I was in disbelief. Since it was released, it’s been surreal! I really enjoyed it because it’s an experience that was exciting and new to me. To be published as young writer is a dream come true because I’ve always wanted to be an author and for it to happen to me so young is just unbelievable.”

Sky has had some wonderful feedback from her family, friends and strangers and has already finished her third book, ‘Viking Girl’ which is about a girl from the Viking era who must find her family, written in the first person so as the reader you experience the journey through the Viking girl’s eyes. It is currently being proof-read and determined whether to be published or not.

Incredibly, she is already working on her fourth book, the sequel to the Stars of the Night Sky. It’s about how the planet of Star2 had changed after evil was gone and how even though they think all evil is abolished, some still remains.

Sky Bradford’s book The Stars of the Night Sky is available to purchase at the Four Peacocks Publishing website.

CommunityAd congratulate Sky Bradford on her amazing achievements and can’t wait to read all her future works!