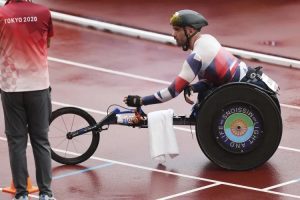 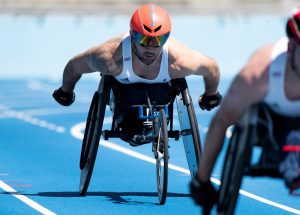 At 16 years of age, JohnBoy Smith suffered a life-changing injury that resulted in paralysis, a collapsed lung, ruptured spleen and perforated bowel.

Training as a plumber and plasterer at the time with dreams of becoming a professional boxer, JohnBoy was out with his friends one day driving past a farm when the farmer mistakenly assumed the group were poachers and chose to selfishly dictate the teenager’s future by firing his rifle which went through the car and into JohnBoy’s spine.

After being in intensive care for a week, Smith was told he would be in a wheelchair for the rest of his life but with the heart of a lion and support from friends, family and the travelling community, JohnBoy started rehab and moved the goalposts on his career.

New challenges were exceeded as Smith began wheelchair body building and powerlifting and would even start competing in seated throw events before entering the world of wheelchair racing.

Smith made an immediate impact in the sport going on to represent England in the T54 marathon event at the Commonwealth Games in Australia. Brilliant performances in the New York marathon and London marathon have established JohnBoy as one of the best wheelchair racers in the world and on his Paralympic debut this year in Tokyo he set a season’s best time of 1:32:25 finishing 10th in the T54 marathon also making history as the first ever Romany Paralympian.

JohnBoy Smith’s story is an inspirational one and we were able to catch up with him upon his return from the Tokyo 2020 Paralympic Games.

After getting such a horrific injury at such a young age, how were you able to motivate yourself day to day to get to where you are now with such a debilitating injury?

If I’m honest, the way I motivated myself when I was first injured was knowing I didn’t have a choice but to pick myself up and do the very best I could with the situation. It was devastating having a life changing injury but at the time I felt that I couldn’t let it get me down because all that would do is send myself and my family into a downhill spiral.

I worked hard whilst in rehabilitation in the Stoke Mandeville spinal unit to make myself better and prepare the best I could for my new life outside of hospital.

Having performed at several other sports such as power lifting, javelin and shot put, what made you decide to pursue wheelchair racing?

I had a great career as a thrower, in 2014 I was ranked number 1 in the world in the F55 category with javelin but for some reason or another, F55 jav was pulled from the 2016 Paralympic Games. I was devastated that it was pulled but I was determined to make it to the Paralympics one way or another. I remember I Googled “wheelchair racing in Kent” and I found a club in Ashford, and the rest as they say is history!

What is your proudest achievement to date?

My proudest achievement is winning a silver medal in the Commonwealth Games in 2018 Gold Coast Marathon! Winning a medal for team England was by far my most proud moment in my career so far!

You had a brilliant debut Paralympics, what did you enjoy most about your time in Tokyo?

I enjoyed every minute of the games in Tokyo. The people, the culture, the support and the volunteers gave us everything. I loved the atmosphere of racing on the streets of Tokyo, we got so much support from everyone we met! But I won’t miss the humidity!

You are incredibly inspiring and motivational, what advice would you give to someone who may have suffered a similar injury to yourself at such a young age?

The only advice I could give someone who has had suffered the same injury as myself is to not let it get you down and always stay positive. Even when times get to their absolute worst, always look for the positive when the negative is trying to take over! Things will get better, you will do better, you can be better!

What is next for you in terms of competition and having achieved so much already, are there any 5-10-year goals you have that you want to achieve?

My long term goals? I would say they are to compete in the next two Paralympic Games at least, so 2024 and 2028 I will still be going for gold! Other than that, I will take it one race at a time, one day at a time, one mile at a time!

Congratulations to Sevenoaks’ JohnBoy Smith for a fantastic debut at the Paralympic Games! Follow his Twitter @JohnboyWcr for more updates.