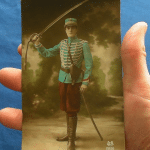 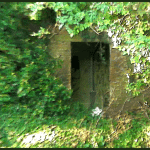 A Sandgate & Hythe YouTuber creamofcardstv has a channel possessing close to 15,000 subscribers with a heavy Hythe presence running throughout. The channel is extremely varied in its content from studies of local sound mirrors and quirky animations of vintage postcards, to rare advertisements staring a youth David Bowie.

Leon Crux’s channel is a treasure chest of curiosities and he emulates another famous local creative H.G Wells with this superbly eccentric channel, describing it rightfully as the “closest thing to time travel” when we had the pleasure of his time. Leon first made a video for YouTube in 2006 “I started making videos to promote my eBay sales but I went off on a bit of a tangent and I’ve never woken up since.”

The history of the place is fascinating and something you’ve explored on your channel before, isn’t it; could you tell our readers a bit more?

I’m interested in both the future and history. I believe they are inextricably linked – future is just a recombination of elements from the past, like rearranging letters in an alphabet to create a seemingly infinite number of books. In order to understand where we are going, we need to understand where we came from. We’re incredibly lucky here in Hythe. It might be a small town but it’s bursting at the seams with hidden historical gems. It’s like an infinite fractal treasure map, the closer we look the more we find and the more connections we make.

How would describe your blogging style and your channel to those unaware?

For years I collected old postcards and cigarette cards but later I realized that what I was really collecting wasn’t inanimate objects but ideas. Not satisfied with just filing other people’s ideas away in my collection, I wanted to create my own, by using the old ones as a stimulus for new ones. I’m a particular fan of the cut-up technique, popularized by the likes of David Bowie, Kurt Cobain and the beatnik writer William Burroughs. You just cut up a text source into words and phrases and then randomly reassemble them to create fridge-magnet type poetry or as a trigger for other ideas. The more nonsensical the combination the more the mind appears to defiantly seek out connections to justify the incongruence. It’s at times like these that you are more likely to stumble across those proverbial eureka moments that even the most creative minds would struggle to find by purely logical and rational thinking alone.

What do you get when you combine the words “cardboard” and “film”? Many of my YouTube videos are interspersed with postcard, and sometimes cigarette card, animations – or mini postcard films as I like to call them. I’m also a big fan of the Terry Gilliam’s cut-out animation in the legendary Monty Python series, a kind of animated surreal collage. I wouldn’t dream of using scissors to cut up my vintage postcards though and so I seek out ones that already have a natural propensity for animation. It dramatically reduces the time spent on post-video editing but I still have to search though hundreds of thousands of cards to find ones that naturally animate well. Inevitably, due to the serendipitous process, there are always going to be imperfections but I think they add to their charm and uniqueness. Of course, sometimes the unexpected absurd outcomes sow the seeds for future video ideas and so the process goes on, like life itself.

You can often pick up vintage postcards quite cheaply at antiques markets, specialist fairs or on eBay but even that can sometimes mount up. So I wanted to challenge myself to make films for nearly nothing – or penny productions as I like to call them. I’m a firm believer that if you look hard enough you can find beauty absolutely anywhere, even in the most mundane and everyday of objects. I’ve made videos on quirky Hythe street signs, red pillar boxes, vintage shop doorway mosaics, lost pubs and cinemas of Hythe and I’ve event attempted to create fridge-magnet type poetry from the trash we trample on in the streets. We literally have everything we need to make a budget film right under our noses.

I really enjoyed learning about the postcards of the past and how they influenced cinema… who knew, it’s an educational resource the channel, isn’t it?

I like the way that vintage postcards, especially fantasy ones, appear to predict the future. You can find flying umbrellas, cars, fish, ladders to heaven, Cabbage Patch Kids and cat women depicted on early 1900’s postcards that seem to uncannily anticipate the iconography in future popular films, toys and songs. Is it pure coincidence, a trick of our hyperactive human imagination or did they inspire the future creators?