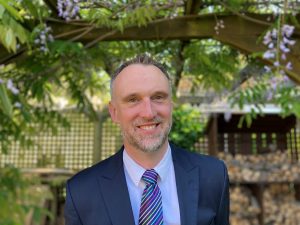 Jon Wilson, CEO of Romney Marsh Community Hub, has been awarded the British Empire Medal (BEM) for his unwavering services to the local community.

The Queen’s Birthday Honours List 2021 demonstrates the extraordinary efforts made by individuals in all four nations of the United Kingdom during the pandemic.

Jon, 45, who grew up in Kingston-upon-Thames before moving to Folkestone in 2004, has worked for a number of charities in his time.

CommunityAd were lucky enough to catch up with Jon (who joined the Hub, previously known as the Romney Marsh Day Centre, back in December 2019) just a few months before we were plunged into lockdown.

How did you first become involved with the Romney Marsh Community Hub?

“After joining in 2019, I called a meeting in March 2020 to work with a number of different organisations, including Councils, the NHS, charities, churches and other interested parties to set up a sustainable and supportive emergency response to help people across the Romney Marsh.

“This birthed the Romney Marsh Community Support Hub, in which we set up a 7-day-a-week call centre and leafleted the Romney Marsh through the help of a team of wonderful volunteers. We worked with GP surgeries and pharmacies to ensure we contacted those that were shielding and had underlying health issues to ensure shopping support, medication deliveries, hot meals and food parcels were distributed when needed.”

How has the Hub worked with local residents since lockdown began?

“We have had over 250 volunteers come forward to help with the emergency response which has been incredible to witness. Teams of volunteers have been answering and responding to calls, carrying out shopping and collecting people’s prescriptions, delivering hot meals, as well as volunteering at a number of vaccination sites across the Romney Marsh, supporting the NHS teams with getting patients through the vaccination buildings safely and swiftly.

“There has been so many messages of thanks and appreciation from people who have been supported. It has been a privilege to work with so many people who have pulled together to make the Romney Marsh Community Support Hub a success.”

How did the news first come to you about being awarded a BEM and what was your initial reaction?

“I was sent a letter from the Cabinet Office approximately 4 weeks before it was announced. I was absolutely shocked and also felt that there have been so many people who have rolled up their sleeves and just got on with things all across up and down the country to support the communities. We don’t do it for awards but in the same breath it is an honour to be recognised. Needless to say, my family were delighted!

“Volunteers have been absolutely crucial. We wouldn’t have been able to do all that we had, without generous people giving up their time and energy to come and join us. The support of local businesses as well as other community groups and organisations has been tremendous. A real team effort!”

Have you always been driven to help the local community from a young age or was this something you gained a passion for through adulthood?

“At the age of 23 I went to work for a charity in Roehampton called Regenerate, this really opened my eyes to the challenges some people face in life but I worked with an inspiring team who brought the best out in people, especially young people at risk of offending, to give them hopes and dreams for the future.

“One of the best events I was involved with during this time was called Kings and Queens. A free three course meal with entertainment under a marquee in the middle of the estate was put on by the charity, for 150 older residents to let them know they were valued and an important part of the community. They also got young people to dress up as waiters to serve on the tables and break down barriers across the generations. It was truly inspiring to be part of this.”

Is there anything you would like our readers to know?

“As we move out of lockdown, the needs of the community will inevitably change but the important work we are doing to support the health and wellbeing of those over 50 in the Romney Marsh will continue. As well as providing an important social function – such as our meals, community get-togethers and activities at the centre – we hold a range of classes for wellbeing and exercise, which all those over 50 can attend.

“It’s a great way to meet new people and learn new skills, as well as keep active and healthy.”

We would like to thank Jon and the team behind the Hub for all of their incredibly selfless work. To find out more and to stay updated on everything the Romney Marsh Community Hub has to offer, follow them on Facebook @RomneyMarshCommunityHub or visit their website today.