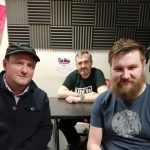 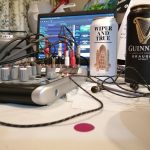 Gareth Reeves has been bringing light comic relief to the radio waves here in Faversham since his first broadcast on 31st May 2017. Ever since then you’ve been able to join every Wednesday, or to the 9-5ers every ‘hump day’, as he religiously brings the tunes and his charisma to his Hump Day Happy Hour show.

So dedicated to the broadcasting cause is Gareth that last year whilst on holiday he broadcast live on Facebook from his tent, “producer Jen was pretty unhappy but you know, priorities, plus there was some really good local cider from Torre Farm”.

CommunityAd have long been aware of the show as its social media page often brings a smile to our faces on any given weekday such is the content, so it was a real pleasure to finally be able to ask Gareth a few questions.

So Gareth, for those readers unaware what is the Hump Day Happy Hour all about?

Originally it was about music, having a bit of a moan and finding the fun in whatever had happened during the week. It’s evolved now to promoting local music when I can, and now I am broadcasting from home the previous ‘designated driver’ slot where alcohol free beer was reviewed, I can review real beer as I don’t need to drive, the added bonus is I also do a Facebook Live on the page for the whole show. But I still have a bit of a moan.

The show is all about bringing a bit of fun, the perfect antidote to these times?

Totally, this past year has been hard for everyone, personally I’ve had losses and I know that we all have needed to find something to laugh about, and to say we have spent time together doing. Wednesday nights seem as good a time as any.

It could be argued we’re in a month of hump days at the moment; how are you coping with it, what joys are you finding in lockdown, any silver linings you’d like to share with listeners?

Beer. I’m joking obviously. Actually having a 17-year-old at home is sometimes really funny, he has the ability to say the best things so again, find the fun.

What makes it a valuable asset to the town and one that must continue?

The wide range of shows, from sensible to me! There’s music for every taste from House to Jazz, there’s a spoken word show about books. Our Town events have all been promoted and covered by the station, and in pre-pandemic times we provided the music to events in town. Why would you want to get rid of it?

How long have you called Faversham home and what makes it such a pleasant community to be a part of?

40 years, my family moved here when I was 3. It’s home, everybody knows you, when my nan was ill, everyone would ask how she was because everyone knew her, that’s what makes it a community.

You’re a big advocate of local music, we’re blessed with a good scene here in Kent, aren’t we? Any locals we should be listening out for?

We are blessed with an amazing scene in Kent, two of my favourites at the moment are Unit 48 and Samuel Ashton. Both brilliant producers of excellent music and completely different sounds.

If you were to co-host your show with any musician dead or alive who would it be and why?

We talked about this question in the car, my musical tastes go from classical to grime, so it’s impossible to choose just one. It ended up more like the perfect dinner party. With Bach, Eminem, someone from Mötley Crüe, Kurt Cobain, Lemmy and Chester Bennington from Linkin Park it would be a great 2 hours.