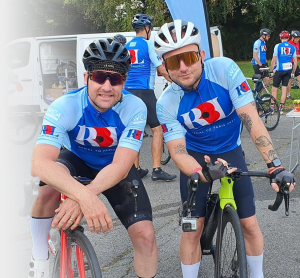 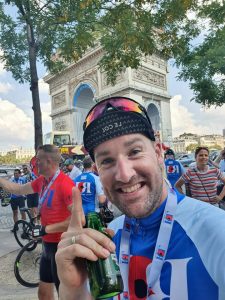 CommunityAd recap the incredible fundraising efforts of Bramley’s Russell “Rusty” Cole in aid of the Royal British Legion, from his original marathon to the more recent Pedal2Paris challenge.

Back in those dark bleak lockdown days that made up the first few months of the year, which felt more like decades, CommunityAd brought you the story about how some late walkers saw an unusual sight on the closes and avenues of Chineham.

Yes, if you were one of those on a midnight stroll way back in the lockdown-days of March then you may been one of the many that encountered something out of the ordinary. It wasn’t just the walkers getting much-needed exercise on the aforementioned night as Russell Cole was pedalling furiously throughout the night, he set out on his journey just before 10am that morning and didn’t stop till 10am the following day and did all of that whilst never leaving the front garden.

That’s right, way back then Russell’s journey was a 24-hour odyssey on a static bike, obliging the lockdown rules and more importantly raising money for a well worthy cause Royal British Legion. As well as getting some much-needed practice in for September’s Pedal2Paris challenge which made the front garden 24 hour marathon in March seem like a gentle warm up. Rusty was currently at the time of writing on his saddle pedalling furious somewhere between his home in Chineham and his end destination of the city of love, although Rusty’s legs or arse might not refer to it as that, PARIS.

When our local bicycle expert and shop owner had landed the other side of the pond he was in fine spirits, describing his first day of cycling which saw him get to Dover with 15 minutes to spare as a day of ‘headwinds’ which is cyclist talk for ‘bloody windy’. Fuelled on all things fine and French, Rusty utilised the shop’s Facebook page to tell the community he was ready to saddle up once more and he was far from alone in doing so.

Rusty and over 170 other Lycra-clad lads and ladies were also braving the clouds, the rains, the roads in aid of the RBL, who organise the Pedal2Paris cycle from London to Paris every year. Thousands of riders have cycled the route and enjoyed the thrill of cycling along the Champs Elysee as a peloton and arriving at the Arc De Triomphe in a Tour De France style finish.

On this four-day ride through beautiful countryside, the Legion organises everything for cyclists, accommodation, bike transportation, ride captains, rolling road closures, and motorbike outriders on roads in France. You simply concentrate on the ride itself, enjoy warm welcomes en route, and comradeship of fellow cyclists. It couldn’t be a more organised trip as the RBL rightly state “our 25 years of experience means we appreciate the small details that are so important, and you can focus on having the best possible ride experience whilst creating unique memories and making friends for life”. From what Rusty has told us via his Facebook videos the organisation is second to none.

The riders in return of course fundraise and Rusty has been busy doing exactly that since we first heard of his mission on that night in March. His fundraising page had made for fascinating and quite frankly inspiring reading as Rusty has worked tirelessly to get into the best shape and fitness so he’s able to reach the finish line Arc De Triomphe on the iconic Champs Elysee. Whilst training flat out he’s also managed to run a business and raise way over double his initial target of £900. At the time of writing this article donations are flooding in at a frenzied rate along with many kind, supportive comments from the local community and beyond.

Rusty is passionate about his fundraising and the RBL as he states “Why The Royal British Legion? Because TOGETHER, WE’RE UNSTOPPABLE!! Not only are they the ones organising this amazing opportunity, but by taking on this challenge for The Royal British Legion I’m helping to provide lifelong support for Armed Forces personnel and their families… They fight for those who served and for those who are currently serving; this includes both myself as a RAF Veteran and my wife who is currently serving”.

Rusty crossed the finish line in central Paris in some style earning himself a medal and a beer, a remarkable 460 kilometres in just four days, all in aid of the RBL. Remarkably, at the time of writing, Rusty was due to saddle up again on September 19th for a casual ride from London to Brighton again raising funds for the RBL; the man is a machine, a fundraising forever-pedalling machine.

If you’d like to donate to Rusty’s Pedal2Paris achievement then head to his JustGiving page, if his cycling adventure has inspired you then be sure you give Rusty a warm and congratulatory welcome whenever you next service your bicycle at Rusty’s Bike Shop.