Out of Bounds Comedy in Sevenoaks 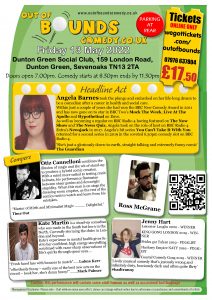 Laughter is the best medicine and after the last few years we’re all in need of it! Thankfully for us, Out of Bounds Comedy Club is coming back to town.

Richard Minnis first put together a comedy night fifteen years ago at his Golf Club in Sevenoaks, this lit the fuse for what would become Out of Bounds Comedy Nights. A touring club that brings top quality acts such as Henning Wehn, Katherine Ryan and Russell Howard and the kind of laughs associated with them. The comedy club has developed into a service used by many charities, sports and social clubs, school PTAs etc. as a means of raising funds while having a great time.

CommunityAd had the pleasure of talking to Richard Minnis, the one man responsible for this joyous operation who, when asked for a highlight of the fifteen years in the comedy business, answered: “Too many to mention anything in particular. I love being involved in raising funds for good causes and spreading smiles. I must have helped to raise hundreds of thousands of pounds over the years.”

From two nights a year at the golf club, Out of Bounds has grown massively and had a whopping 200 nights booked in for 2020 but we all know what happened then… but Richard is back doing what he loves and he tells us “You cannot believe how good it is to be entertaining people again in person. The last 2 years has been terrible for the industry with most comedians and club employees having no income at all.”

Why is it so important that comedy clubs such as this exist for the good of the industry?

We are a grassroots comedy club, we put on great acts, not always necessarily TV names, and we support the comedy industry from the bottom up. There is too much expectation for TV names and theatre venues do not have the atmosphere that a genuine comedy club creates. People need to see the working acts, people that are doing this every day of the week, not just when they are booked for a TV show or reality series.

Acts such as Angela Barnes, a regular on Mock the Week who happens to be appearing on our May line-up, performed one of her very first gigs for me in Borough Green on a Monday night over 11 years ago. Being a local girl, from Maidstone, she supports me and other local promoters by keeping involved in the wider comedy scene. All of the big names you see on TV have started doing unpaid open mic spots in tiny clubs around the country, you never know when you might see a star of the future.

Why should readers be heading down to the Dunton Green Social Club on Friday 13th May?

We always have great line-ups and a good mix of comedic style. The room is in the back of the Social Club and it takes you back in time a bit. Our regular punters are regulars for a reason, we entertain them. You just have to come and see for yourself.

Live entertainment needs people in attendance, its community to get behind it and in this case have a hearty laugh. Out of Bounds run a number of local events in North Kent and beyond, as well as arranging private events as fundraisers or corporate functions. Come and support Local Live Comedy, it needs you!

Find out more about the Out of Bounds Comedy Nights by visiting the website. Support local acts near you and who knows, you might just discover an upcoming star.