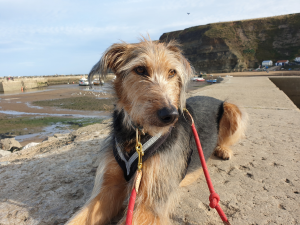 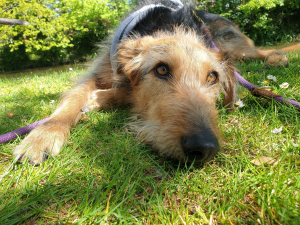 Dora is a permanent resident at the Kent Greyhound Rescue, and her antics as well as her long-term rescue status have made her quite the local celebrity.

We spoke with a Kent Greyhound Rescue volunteer, Jacquie, to learn what it’s like caring for a foster with this much personality.

Dora is a lurcher – her mother was a German Shepherd and her father was a greyhound crossed with a Bedlington terrier. As Jacquie explains, “This is quite a combination, meaning Dora has the guarding traits of a German Shepherd, the naughtiness and brains of a terrier, and the loving side of a greyhound.”

Kent Greyhound Rescue took on Dora and her brother when they got themselves in trouble for worrying the local sheep. Dora’s brother was rehomed, but Dora proved more difficult to place as unfortunately one of her strengths is also her greatest weakness. “Dora’s brains are her downfall,” Jacquie says. “She is very clever, which has led to all sorts of problems and issues. She came to the rescue in 2017 at the age of about 18 months; she will be eight years old in September and she has been at the rescue all that time. Initially, she was up for homing but her special needs made us realise she would be really difficult to home, and therefore she has become one of our ‘sanctuary dogs’ so is in permanent foster with the charity.”

Dora lives up to her namesake, and has more adventure stories than Indiana Jones. She can leap an eight-foot fence, and was once found on the roof of the kennel block. Once she leapt into a Hermes van and only her lack of opposable thumbs prevented her from commandeering it and driving it away, making do with guarding it so vehemently she refused to let the driver back in. She can open doors and windows, and was once found in the Channel Tunnel after having run away from her foster home nearby.

Jacquie explains that Dora also has very strong guarding instincts. She is very friendly and loving to people she knows, but strangers can prove difficult for her to manage. “Dora loves meeting people while out and about. She is very gentle and loving; the guarding instinct only kicks in on property she feels is her own. This has meant Dora has become quite a celebrity when she is walking near her foster home in Hythe and Folkestone or attending KGR charity events. Volunteers walking her have been chased down the street by her ‘fans’ wanting to say hello and give her a hug.”

It’s clear then that Dora’s greatest talent is stealing the hearts of everyone around her. Two of the volunteers at the rescue have written books about her, and they are both available on the Kent Greyhound Rescue website with all proceeds going back into the charity.

“Dora is in permanent foster because she is so special,” Jacquie says. “She needs owners who are calm, consistent, and kind. She must not be allowed to overthink or worry, and is quite a timid girl at heart. She is playful, funny, and affectionate, and everyone at KGR loves her to bits.”

Find out more about the wonderful work of Kent Greyhound Rescue by visiting their website.