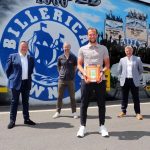 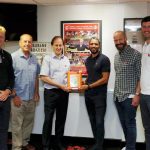 The Justin Edinburgh 3 Foundation was set up by founder and son Charlie Edinburgh and in June of this year, three defibrillator donations were made to venues that Justin was associated with: Leyton Orient Supporters Club, Toni & Guy (Billericay) and Billericay Town Football Club.

The former FA Cup and League Cup winner tragically died last year after suffering a cardiac arrest while in the gym, aged just 49.

An on-site Public Access Defibrillator (PAD) could have increased Edinburgh’s chance of survival dramatically and it is because of this that the Justin Edinburgh 3 (JE3) Foundation’s aim is to support UK heart health charities and to campaign for legislative change – Justin’s Law – which would make it compulsory for all health, fitness and sports facilities to be equipped with a Public Access Defibrillator (PAD).

The JE3 Foundation could potentially help save many lives, when did you make the decision to set this up?

“It was something that came to me when we received the devastating news in hospital that there was nothing else that they could do for Dad, I thought to myself as a family we cannot let him or his legacy be forgotten about and the idea of making a positive difference with a Foundation/Charity seemed like the obvious decision. Dad was all about helping and supporting people and with this foundation it allows us to do just that and continue his legacy.”

Was it a collective idea from the family to start up the foundation? What steps did you take to get hold of the defibrillators?

“Once I had the idea, I left it a few days before raising it with my mum and sister, but it was something that they along with the rest of our family have supported and since then we have gone from strength to strength. We have managed to raise some significant funds since launching in June of last year, this has allowed us to purchase defibrillators and to provide them to three very special places to us as a family.”

Can you tell us more about your campaign for ‘Justin’s Law’?

“Our primary focus is to campaign for ‘Justin’s Law’ whereby it will be a legal requirement for all health and sports facilities across the United Kingdom to be equipped with a defibrillator. No matter what your sport, you want to know that you are safe and a defibrillator is a vital piece of equipment that can go a long way to increasing survival rates from cardiac arrest. Dad was training in a gym when he suffered a cardiac arrest, the facility wasn’t equipped with a defibrillator and in hindsight could have saved him, we want to make sure no family has to endure the same pain we have and we feel this is a perfect way to continue Dad’s legacy.”

You have raised almost £70,000 through your JustGiving page. Have you been surprised by the response of the public and the donations you have received?

“The support and outpouring of goodwill we have had since Dad’s tragic and untimely passing has been truly overwhelming. It’s not until you start hearing and reading stories of what a special man he was and what a significant part he played in people’s lives that it makes you realise just how we have been able to raise such a significant amount. Every donation we have received so far means ever so much to myself, my family and everyone associated with JE3 Foundation; it really is going to allow us to make a difference for everyone in this country.”

The JE3 Foundation tackles an issue which you mention could have potentially saved your dad’s life. Has it been difficult to push yourself day to day and engage with the community, delivering the defibrillator knowing this equipment could have helped?

“Difficult, of course, because it leaves you constantly asking the question what if? But Dad was such a positive and upbeat person and he instilled that in us as a family. So, to be able to donate these potentially life-saving pieces of equipment fills me with immense pride knowing just what a difference we could be making and it’s all in Dad’s name and memory.”

You have already delivered defibrillators to 3 venues that Justin was associated with. Are there any further plans for the future that you have for the JE3 Foundation?

“Defibrillators are definitely things we hope to be able to continue to provide, however this isn’t our primary focus. With the current climate and how COVID-19 has impacted the world, this has prevented us being able to do a lot of the work we were hoping to achieve going into 2020 so we felt that the donation of defibrillators was something that we could perform even during these unprecedented times.”

There have been so many tributes and kind words said about Justin but from your own personal perspective, what are your greatest memories of your dad?

“There are so many, and I could honestly be here all day talking of memories and stories of such a great man, that I am honoured and proud to call my Dad. He has done so much for me and my family and for that I will be forever grateful. My lasting memory however was watching him celebrate with his Leyton Orient squad and their families following defeat in the FA Trophy final weeks before his passing. Despite defeat, he rallied the team explained to them just how much that group meant to him and to all celebrate the success they had experienced that season as a collective. From that moment on many smiles, laughs and drinks were enjoyed across a wonderful night of celebrations, it was touching to see looking back now, on top of the world and enjoying life to the fullest.”

It has been just over a year since your dad’s tragic passing, with all the incredible work your family are doing through the JE3 Foundation, is it fair to say he would be immensely proud of how you are all not only helping people but continuing Justin’s legacy?

“I would like to think we are making him proud; we have come a long way in a short space of time. A year has passed so quickly and there have been many ups and downs, but a day doesn’t pass where he isn’t spoken about, we keep him at the forefront of everything we do. He is our motivation and everything we do is for him and to make sure that in years to come people are still remembering and honouring the great man and everything he was able to achieve in his career and in life, JE3 Foundation will continue to do that I am certain.”

You can find out more about this incredible foundation on their website, and follow them on Instagram and Twitter to keep up to date with their lifesaving endeavours. At the time of writing, the JustGiving page has raised an amazing £72,794 from over 1500 supporters, 97% of the desired total. If you can, consider donating today to raise that last 3% and help these wonderful people make such important changes. As Charlie himself said,