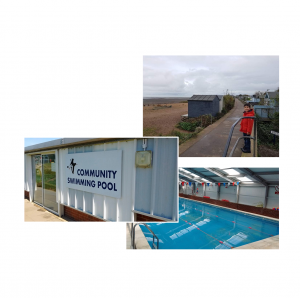 As part of the Joy Lane Community Pool Fundraising Campaign, 8-year-old local lad James Banbury has walked and cycled a more-than-impressive 207-miles and raised over £155 in the process.

To help reach the school’s target of £30,000, 8-year-old James Banbury set up his own fundraiser, with help from his mum May Banbury, which saw him take on a challenge of walking and cycling the same amount of miles as the Kent coastline; 207 of them to be precise.

The fundraiser is hoping to purchase a more efficient and environmentally friendly heat exchanger, improve the insulation for the pool surround and pool cover, make improvements to the pump house roof, and build a reception or waiting area for parents and carers.

We caught up with James and May to find out a little bit more about James’ epic journey, how he managed to clock up the impressive number of miles and what they love about living in Whitstable.

James, who is in Year 3 at Joy Lane and is also a volunteer at the local museum alongside his nan and grandad, spoke to us about where the idea originated, explaining: “Me and my dad were coming back from Tesco on our bike and I said when I’m an adult I would like to walk the coast and he told me you can do it now. He said each weekend we can do little bits, like Whitstable to Herne Bay and then Herne Bay to Birchington and build up the miles.”

May: “Because that’s quite a big thing to do over the weekend, and because the school needed fundraisers we thought we could tie it in and try to raise money at the same time. We included his local walks and cycles to help reach the target.

“A general weekday is cycling down to school, walking back for home time and then weekends my husband plans the route and they go on the next leg of their coastal journey. On one day he’ll go out on the bike locally and other days he’ll go walking.

James: “We usually go out for about 3 hours on the Saturday, we got caught in the rain once but we decided to keep going even though we were wearing jeans and it was really uncomfortable.”

James is not only en route to finish his epic journey a few weeks ahead of schedule, he also completed the Herne Bay Race for Life last year as well as running 50 miles in just two weeks to help raise money to build a new sensory area at the school.

Keep up the amazing work James and we are sure this won’t be the last we hear of your superhero like fundraising!

To donate to James’ fundraiser visit his GoFundMe and to donate to the school’s visit their GoFundMe.