An interview with Becki & Nicki from Whitstable’s Potato Tomato

Potato Tomato is a 100% vegan restaurant on Oxford Street, owned and run by sisters Becky Jones and Niki Forster. Serving a wide range of plant-based foods including topped burgers, healthy soups and salads, and indulgent sweet treats such as brownies and waffles.

In this issue of the Whitstable CommunityAd Magazine, we catch up with Becki and Nicki from Potato Tomato to find out more about their restaurant and the importance of going vegan.

Where did the idea behind Potato Tomato come from?

Niki started the business as a hut in the Whitstable Harbour Market in June 2016. She was fed up with her job and wanted to try something new. There was a definite gap in the market for a vegan eatery in Whitstable so she went for it! Niki ran the hut for a year before Becky came on board and we opened the restaurant on Oxford Street together in August 2017. Niki continued to run the hut alongside the restaurant until January 2018, when she closed it to focus fully on the restaurant.

Have you noticed a surge of veganism over the last few years and if so, why do you think this is?

Yes! We’ve been vegan for 33 years (our parents went vegan in 1987) and we can’t believe how veganism has boomed in the last few years! We strongly feel that the surge in veganism has been down to the use of social media. Social media platforms provide easy access to information. People are able to share information about what happens to animals from ‘farm to fork’ and after people have seen those images or videos, they are able to search for further information about the meat and dairy industries. It’s also really easy to find out about how to go vegan, including learning about alternatives to animal products.

Additionally, it has come to light in recent years that there is a definite link between animal agriculture and climate change. Many scientists agree that a plant-based diet is the most environmentally friendly.

Lastly, lots of people are going vegan for health reasons. Processed red meats have been classified by the World Health Organisation as carcinogenic. The documentary, ‘The Game Changers’ on Netflix, looks into the benefits of a plant-based diet for human health and lots of people have gone vegan after watching it!

What would your response be to those who are of the opinion that people need to have meat in their diet and that there are too many food restrictions when you go vegan and by going vegan it can be quite financially costly?

All national health organisations around the world (NHS included) state that a vegan diet is suitable for all stages of life. We don’t need meat, we need protein. There are many excellent sources of plant-based protein available, such as beans, nuts, pulses, soya, tofu, grains. Lots of vegetables are also high in protein!

Many people find that when they go vegan, it opens up a whole new world of flavours and foods! It’s so easy to replace meat and dairy with plant-based alternatives, there’s no need to totally change what you eat. For example, swap beef mince for soya mince or a tin of lentils in a Bolognese. When we were younger, we hardly ever ate out in restaurants because there were no vegan options, just chips and salad! However, with the surge of veganism, nearly every restaurant will have at least one vegan option on their menu, and lots of chain restaurants offer a full vegan menu!

The staples of a vegan diet are actually some of the cheapest items in the supermarket. Tinned lentils, beans and chickpeas are really cheap and a great addition to many dishes. Vegetables, pasta, rice etc. are also cheap. High welfare meat is very expensive, even more so than many vegan meat alternatives. With the rise in veganism and supermarkets bringing out their own versions of meat alternatives, the prices are coming down all the time.

If there is a way, what would you say needs to be done to ensure/persuade those to start up a vegan diet?

There are three great reasons to go vegan – the animals, the environment, and health. People have different concerns and therefore it’s important to promote all three aspects. Alongside this, we feel it’s really important to make veganism accessible and appealing to all. With the number of new vegan products coming to the market every week, veganism is going mainstream. It’s becoming less alien, and people are becoming more likely to give the alternatives a try.

A personal view is that people are able to eat meat and dairy because they don’t see what happens to the animals on factory farms and inside slaughterhouses. It’s all carefully hidden away. To quote Sir Paul McCartney, “If slaughterhouses had glass walls, everyone would be vegetarian.”

You’re have hosted a number of nights at Potato Tomatom, was it always the plan to host quite regular events and will you be looking to put on any more over the spring/summer period?

We love doing the extras alongside the day-to-day running of the restaurant. We have the space, so we may as well put it to good use! Matt Hoss is a good friend of ours and we love that we are able to offer him the space to hold comedy nights. We already have another comedy night booked in for June! 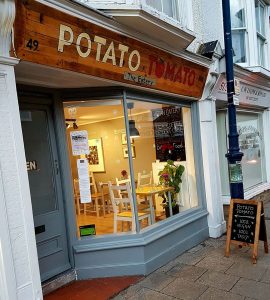 Last year we took on the established Maidstone Vegan Festival and we have just announced the date for this year’s festival (Saturday 11th July). This is a big event where we get many local and national vegan businesses and organisations together to promote all aspects of veganism. We also have live music and talks throughout the day and activities for children. It’s a great day out for vegans and non-vegans alike!

In December we held the first Whitstable Vegan Christmas Fair at the Umbrella Centre, which was a huge success. We plan on holding it again this year.

Since Potato Tomato first started, how has the feedback been from the people of Whitstable?

It’s been amazing! We have lots of regular customers who we have gotten to know well, and we usually know what they’ll order! We get wonderful compliments from our customers while they’re in the restaurant; quite often we’ll end up chatting to people in the kitchen as they walk through to the garden or toilet! We particularly enjoy changing peoples’ perceptions about vegan food. We often get remarks along the lines of, “I’m not vegan, but that was delicious!”

We feel really honoured that so many of our customers leave us positive reviews on various sites. We’ve been the number 1 restaurant in Whitstable on TripAdvisor since the summer. We get in so many customers because of this achievement, vegan and non-vegan alike. We also recently found out we’re number 1 for ‘cheap eats’ in Kent on TripAdvisor, which is great, because people recognise that we’re affordable.

Away from Potato Tomato, what are your hobbies and interests?

We both have young children (all vegan of course!), who take up most of our time! Niki is a keen kickboxer at Fighting Lions Martial Arts Centre and has been for many years. She trains regularly and has a 2nd Dan black belt. Becky enjoys taking her dogs for walks in the countryside, and volunteers weekly at New Hope Animal Rescue in Herne Bay. We both enjoy meeting up with our group of friends for dinner and drinks.