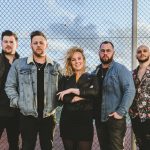 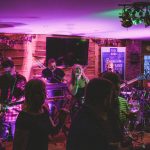 Before the world became a masked, distanced and weary place there were gigs and events aplenty and quite often here in Kent if you found yourself at one of these events or gigs and it was deemed to be “popping off” then chances are it was due to Herne Bay’s FNKHAUS.

The party band had a jam-packed calendar for 2020, from public gigs to private functions and weddings the five of them were set to be very busy. However, as with any performers, 2020 has been a case of cancelling reality and planning the virtual, the band’s lead singer Sophie Green racked up 25,000 visitors to one of her live Facebook gigs. The band have treated to fans to lockdown sessions which are well worth checking out.

There is a light at the end of the tunnel though, it appears as the outdoor gigs show signs of returning before the summer is out and the band are taking wedding bookings for 2021, and if there any readers who are tying the knot then you should definitely check the band’s superb reviews. CommunityAd had the pleasure of chatting with Sam from the band before the world got flipped upside down.

So, FNKHAUS, the name is a curious one, what’s the origin behind that?

It’s a combination of the genres that originally best described our sound and musical direction, “Funk and House” with some vowels removed and the added German spelling of “House” to make things more interesting!

How long have you been performing together?

Some of us have performed together for over 10 years but in this configuration, it’s been a solid 18 months of the five of us working together and building the FNKHAUS name in the local area.

For those readers unaware how would you describe the style of the band?

Our set typically includes floor fillers, funky beats and classic dance anthems, ranging from the likes of Chaka Khan to Calvin Harris. We always like to generate a party atmosphere with medleys and mash-ups to get people dancing and enjoying themselves!

I’ve interviewed a few musical-minded people in Kent and they are convinced it’s a thriving scene, would you agree?

I’m not sure about ‘thriving’, it seems there are a lot of music acts for the declining number of public venues and events operating. But this just makes it more important to work hard and build our reputation to stick out amongst the crowd because there are some fantastic bands operating locally.

If you were able to recruit for FNKHAUS (dead or alive) who would it be and why?

Desert Island Discs time, if you could pick three singles to take with you on a desert island?

Chaka Khan “I Feel For You”

Technotronic “Pump Up The Jam”

You play all around Kent but you have ties to Herne Bay, right? What makes it such a pleasant community to be a part of?

Herne Bay is a lovely town, there’s a great sense of community all year round but it really comes into its own in the summer months when the sun is shining and there are activities and events for everybody to enjoy!