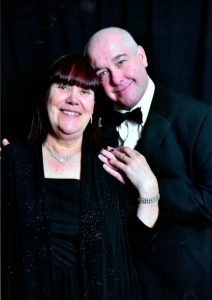 The Ramsgate Events Group and Starlite have staged many shows and events over the past forty years. This was only possible with the help of many local and very talented acts and performers. One such regular is Thanet’s very own, “Mr Entertainment”, Gordon Clarkson, who is part of our Festival. Read and enjoy Gordon’s story.

After a childhood of entertaining locally and dreaming of being in show business, at the age of 18, Gordon got his first proper job in theatre behind the scenes, subsequently working in box offices for two years. Gordon became a member of the actor’s union Equity. This led to a pantomime production presented for the Christmas season in London, first at Waltham Forest, then at Battersea. In that year, he also set up the first of his production companies named Nelson Productions after his deceased grandfather. As well as his own shows, theatre seasons for other managements followed, including being in the company of the re-opening pantomime at the historic Theatre Royal, Margate in 1988.

The following year he worked in pantomime for Girling Productions here at Ramsgate at the Granville. It was during this happy season that he met the lady who was destined to become his wife. Joy was working on the technical side of the show and a friendship blossomed.

In the early Spring of 1990, Gordon was invited to present Sunday night Music Hall at the Lido in Cliftonville and asked Joy to work with him. A successful professional as well as personal partnership resulted!

They decided together to rename the company ‘Gordon Clarkson Productions’, as sole traders. For the years that followed took their various productions to theatres up and down the country. In tandem with their busy schedule of summer season shows, countless editions of ‘The Good Old Days’ Music Hall show, and much more, they also found time to tour one nighters and short seasons for other managements. They have done television, designed and operated ‘Kids Club’ formats and produced several plays, about 12 pantomimes are written by Gordon. Excellent costumes were designed and made by Joy who also appeared occasionally too! They also produced ‘Flashing Eyes’ an original musical from the book by Gordon and score by W. Leonard Brooks.

Within the year they finally married, they produced the first summer season show featuring the character of Simple Simon. In recent years the Simple Simon brand celebrated 25 years of the show. Sadly, Gordon and Joy did not reach their own 25 year anniversary, as Joy passed away the year before, but her legacy of costumes and scenery and her influence and contribution to the successful career they enjoyed together remains undiminished.

During lockdown, Gordon started writing his story, realising during initial research that when finished, not only would it be a personal journal, but one of significant social history as the business the eager young man entered professionally in 1982 has changed beyond any recognition. The eager young man is now an eager older man, but he still gets a thrill every time he steps on to a stage hoping to bring happiness and entertainment to people of all ages, which professionally, in 2022 he will have been doing for 40 years.

About the Pantomime – Gordon Clarkson Productions

Children’s favourite Simple Simon will be making his first appearance after 2 years in an especially re-devised pantomime as part of Ramsgate’s Royal Harbour 200th Anniversary Festival.

The popular character, as portrayed by Gordon Clarkson has been entertaining family audiences for over 25 years.

The pantomime, ‘Simple Simon and the Golden Goose’, will feature Simon as he embarks on a quest to save his mum Dame Dolly from being made homeless. His journey is overseen by the kind fairy Lily-Bell, and he meets a host of other characters on the way, all portrayed by just three other versatile actors; Stacy Golding, Ian Douglas and Jane Pulford, and supported by the live musical backing of Paul Stewart and Roy Golding.

The 60-minute performance will take place on Sunday September 26 at 2:30pm in the BIG TOP Theatre Marquee. Tickets are only £5, one price for all.

Find out more about Gordon Clarkson Productions by visiting the website.

PrevPreviousLooping the Loop
NextAcademy FM – Music can change your lifeNext