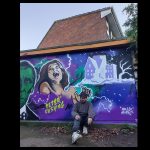 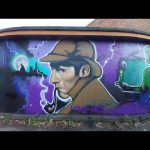 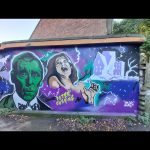 At the end of last year, a Whitstable-inspired mural tribute by Dream Safari appeared, reviving an alleyway with bright colours and powerful imagery near the train station. The tribute focuses on the legendary actor Peter Cushing, known as Whitstable’s adopted son who starred in several Hammer Production horror movies and lived in our town for 36 years, initially coming down on weekends before retiring and permanently moving to Whitstable.

What are your earliest memories of street art?

When I was a kid my uncle would play me lots of music, teach me to sketch graffiti letters and showed me 80’s Japanese manga cartoons and that inspired me a lot.

As I got older, making art was my primary outlet for all this pent-up teen angst! For me doing graffiti and street art was about freedom and not conforming to the norm.

Now, after years of working in the creative industry, I’m focusing my energy on my mural business and making the local scene a bit more vibrant and exciting.

When did you realise that street art was a passion of yours and something you would like to pursue full time?

I used to paint a lot and I kept getting into trouble because I’m not very good at keeping anonymous!

I couldn’t give up painting because I’d go insane, but there comes a point when you need to start thinking about the future and if you get paid for doing something you love, you never work a day in your life!

It’s not easy, everyday I’m pushing for more work and every time I paint, I’m getting better at what I do!

What inspired you to create the Peter Cushing mural?

Are there any other mural ideas that you have for the town?

I’ve been approached by Whitstable FC about a potential mural on the grounds!

I’d be open to doing more stuff in Whitstable and I’m always looking for Kentish folklore to inspire me! Painting portraits is my favourite thing to do at the moment!

From the many different artworks that you have produced, do you have a favourite piece and why?

There are hundreds of pieces of work, from the UK to Berlin to Athens… But my favourites are from the early days, when I was younger and didn’t really know what I was doing! Nothing can beat being young, travelling, camping and painting with friends in the summertime.