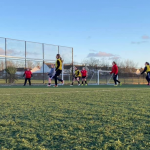 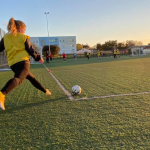 For the first time in Deal Town FC’s history, they will have a Women’s team competing next season alongside the men’s team.

After football went on a hiatus locally for over a year, it’s a joyous occasion that we can bring to you this exciting development within Deal Town Football Club’s legacy.

CommunityAd caught up with Deal Town FC Women’s first team Manager and Head of Girls football at Deal Town Rangers, Martin Hollands, to discuss the team and this historic moment within the club.

Martin, a former Deal Town FC Reserve’s player, has been coaching for the past three years but has only been the 1st team manager since the end of April, taking over from Richard Siddans and Jess Laker who help the side take part in its maiden season in Women’s senior football.

Talking about the development and the importance of the team, Martin explains: “The Women’s team is the cornerstone of what we are trying to achieve at Deal Town Rangers. It’s the beacon for all girls at the club.

“Over the past two years at Deal Town Rangers, we have worked hard to create an exclusive environment for girls to come and express themselves with the ball. An environment free from the pressures that surrounds boys’ football.

“We love football and we believe our girls are part of the new wave of the beautiful game. I want to support the growth of the women’s and girls game to show that football is truly for all.

“To help achieve this, we must provide more opportunities for girls to play. It is essential that we create more positive pathways for girls.

“Before the COVID outbreak I went to Wembley Stadium on a course to bring the Wildcats to Deal Town Rangers, which is now successfully run under the leadership of Simon Earle, every Sunday morning at Goodwin Academy, which is a great introduction into football.

“We have worked hard to get an Under 11’s team and Under 13’s team for next season. I started with only one girl down at Goodwin Academy on a rainy Friday night over a year ago and now we have had around 30 girls join us all at different stages of their development.

“Our Under 11’s is now run by Ross Evernden, a really great coach and our u13’s is currently led by one of our first team players Maisie Dennison, who has been fantastic in running the side and also helping with the Wildcats.

“At the end of May this work was recognised by Deal Town FC Chair, Natalie Benville, the board then proposed for us to become Deal Town Women FC. This is a fantastic opportunity for the team to play for this great club and play without match and training fees, it gives them the freedom to come and just play.

“Seeing the team play at the Charles Ground week-in week-out will be great for girls in the town. I played down there and will be really proud to be in the dug-out for the girls. We all cannot wait to get started.”

It seems to be a friendly club with a strong emphasis on community, is that fair to say?

Are you currently in need of any players, coaches, volunteers?

“We are always looking for players, volunteers or anyone that wants to get involved. If anyone wants to help create more girls’ teams at different age groups at the Rangers, or just wish to get involved please feel free to message me at [email protected].”

Games will be played on Sundays and advertised on their Facebook, Twitter and Instagram @dealtownwomenfc, it would be great if locals can come and show their support!