Bonnie was brought over from UAE along with her son Clyde, and both were adopted by Mel 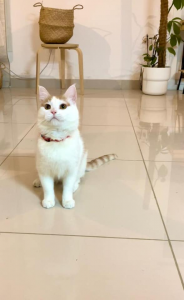 Hector has been adopted by a lady in Abu Dhabi 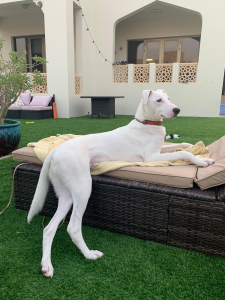 Mel Stones has been rescuing animals from the streets of Abu Dhabi for over a decade.

A short break from her university studies turned into a life-changing mission, and she now dedicates herself to rescuing cats and dogs from the terrible conditions she has witnessed overseas.

We spoke to Mel Stones about the heart-breaking, heart-warming nature of the job she’s taken on.

“It was whilst I was back in Abu Dhabi on a break that I decided to start a small group on Facebook to help the many animals being found on the street, including some that I found myself and needed to find homes for quickly. This small little Facebook group slowly grew to be one of the biggest volunteer-run rescues in the U.A.E for many years, often with 65-140 animals to rehome at a time,” Mel explains.

She continued running the rescue remotely, while completing his studies at university in Toronto, and even when she moved to the UK, the plight of the animals in Abu Dhabi stayed with her. “I couldn’t turn my back on the animals there,” Mel says.

The majority of rescue work in Abu Dhabi is done by volunteers like Mel who sacrifice their time and energy to help the animals there, which are often found in shocking conditions. “We rehome the majority of our rescues in Abu Dhabi and Dubai, however, if we find we are struggling for over a year or two to rehome any in particular due to lack of homes, we are open to sending them abroad. We also try and rehome dogs that would be suited to cooler climates abroad, such as huskies, of which there are so many.”

There are huge numbers of stray cats and dogs, but there are no government programmes making provision for them and no financial aid available for rescues. Another sad factor is the amount of ex-pats who leave their pets behind when they move out of the cities.

“A dog needs help no matter where they are from in the world,” Mel says.

If you would like to help Mel Stones provide more happy endings for animals like Bonnie, Kenzo, and Hector, you can donate to her GoFundMe page here.