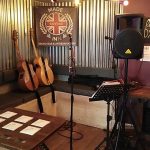 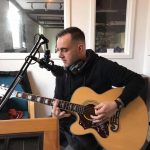 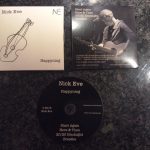 Ashford musician Nick Eve describes the town as “improving all the time”, and one which represents greater opportunity now for local musicians, “there’s a sense of community and support throughout. We all just want to see each other do well”. Nick should know as he has been gigging in and about town for over a decade, a fact that he confesses makes him ‘feel old’.

Although we’d dispute that there is an old charm to his music, he’s versatile in being able to cover a good range of materials from 60s to modern day offerings. Nick can tailor a set to suit a venue or crowd. He often deploys his own original material, into a set, which is often “rock-based, I’m a sucker for a catchy riff and a good melody, while keeping a rocky undertone too”.

Although those sets are a bit of a rarity given the current situation, for musicians and creatives across the globe 2020 has been as Nick aptly puts it ‘QUIET’, Nick has had a quarter of the gigs he usually would and that of course takes its toll on any musician or performer. “I do miss gigging; it’s a release for me – to smash out a few songs and just sing can be a real escape. Otherwise, I have been noodling away for a few new tunes and am planning a home studio build which will give me more space and a focus to write, record and get more confident with playing a higher percentage of my own songs live”.

One venue that has been a regular stomping and strumming ground for Nick Eve in the past is the marvellous Made Inn, the micro pub is “different to many, many pubs out there. It’s chilled, it’s personal, it’s welcoming and has a ‘family’ vibe about the place”.

“I have loved playing at Made Inn. It serves as two-fold for you; it’s a supportive and invested crowd who take an active interest in the musician playing. Sometime us musicians, especially solo artists can find it difficult to ‘break’ into a crowd in some pubs. We are literally background music at times; and sometimes, that’s absolutely fine. But if you’re trying to learn, improve and brave enough to play your own material, playing to an honest and personal crowd gives massive insight to what’s working for you and where you can improve. Also, I love playing covers of rock tunes which always go down well there, so it’s a win-win!”

You’ve been gigging virtually via Facebook but it must be so nice to get back in front of an audience?

Oh absolutely, I have had a handful of gigs over the last couple of months or so and it’s been great. The feedback I have had too has been really positive and I think people have been grateful to be able to watch live music in person.

If you could duet with anyone, living or dead, who would it be and why?

If you’d like to support Nick, you can find him on Facebook @nickevemusic plus Spotify, Amazon Music, Soundcloud, iTunes, plus continue to support local artists and venues. They only survive with our help. Stay safe everyone!